APEX: The Bruce Willis Movie of the Week 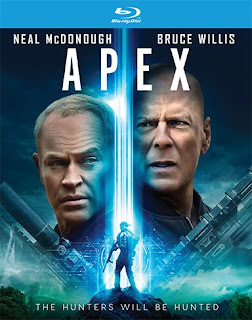 Tonight’s Bruce Willis Movie-of-the-Week is Apex, another budget conscious riff on “The Most Dangerous Game.” This one is just as laughably bad as the other six movies Willis knocked-out in 2021, but believe it or not, a few of those laughs appear to be intentional.

In the near future, Apex is a high-tech corporation that gives rich people the opportunity to hunt humans on a remote island. They recruit prison inmates as prey, offering freedom if they survive the hunt. Enter Thomas Malone (Willis), a disgraced ex-cop now doing life in prison. To one group of severely overconfident hunters - led by glowering trillionaire Samuel Rainsford (Neil McDonough) - he just looks like a tired old man. But of course, they underestimate their prey.

Willis spends a majority of his screen time hobbling through the woods, leaning against trees in exhaustion and occasionally eavesdropping on the hunters’ bickering. And in one hilariously prolonged scene, we watch Malone enjoy a breakfast of hallucinogenic berries. We rarely actually see Willis interacting with the rest of the cast, prompting one to suspect all his scenes were shot separately (maybe on a weekend between shooting Survive the Game and Deadlock).

Elsewhere on the island, this group of ‘elite’ hunters has to be the dumbest collection of toxic masculinity - including the lone female in the group - ever assembled to gun down an old man (with automatic weapons, no less). In fact, their frequent verbal pissing contests usually result in them killing each other. Perhaps writer-director Edward John Drake found inspiration from Tucker & Dale vs. Evil, but whatever the case, Rainsford has to bring in more cannon fodder professional killers to finish the job. This results in a genuinely amusing montage of Malone taking-out assorted bad guys one by one (including a hilarious scene involving the accidental firing of a rocket launcher). However, Willis is still conspicuously off-camera for most of the mayhem.Bad performances, stupefying dialogue and phony special effects notwithstanding, I can’t honestly say Apex is boring. Like most of his recent play-for-pay gigs, Willis puts minimal effort into his role, displaying the lazy arrogance of a guy who thinks he’s above the material, yet blissfully unaware of just how far he's fallen since the Die Hard residuals dried up. So there’s a lot of fun to be had at his expense, especially during a scene featuring sly allusions to Willis’ bonafide classics. Sure, Drake probably intended it as a respectful homage, but it's more fun to think it was meant as a reminder of the good ol’ days, back when his star still gave a damn.