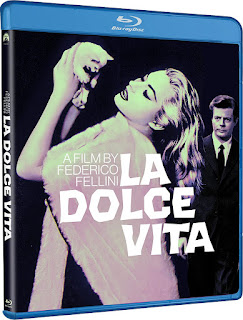 As someone who often boasts being something of a cinephile, it shames me to confess I never actually sat down to take in a Frederico Fellini movie until now. Sure, I’m aware of his influence on world cinema and familiar with some of his films by reputation, but just never got around to it.

Going into it cold, I didn’t know what to expect from La Dolce Vita, but at least Martin Scorsese was on-hand to provide a fitting introduction. He offers a sincere appreciation and nostalgic anecdote about what this film means to him. And hey, if Scorsese ain’t a ringing endorsement, nothing is.

I won’t claim to understand everything I saw in the film - there’s a lot to take in - but these are a few of my takeaways:

I don’t know if it’s indicative of all his films, but Fellini is a master of pacing, knowing when a particular scene has run its course and whether or not providing traditional transition is required. No matter how tenuously tied to the overall narrative, every scene in La Dolce Vita is interesting, either thematically, visually or when focused on a particular peripheral character.

Speaking of narrative, La Dolce Vita doesn’t initially seem to be about anything…just a series of chapters depicting a week in the life of celebrity journalist Marcello Rubini (Marcello Mastroianni), who isn't the most sympathetic character on Earth. By the end, I still wasn’t sure I even liked the guy. But certain scenes lingered with me afterwards, particularly those where Marcello displays rare moments of emotional vulnerability, only to be hurt by those he opens up to. The film’s most telling sequence involves an evening in Rome with his visiting father, which doesn’t go as expected. We may not always sympathize with Marcello, but we begin to understand him. Ultimately, Marcello is not quite the carefree womanizer he appears to be. His life is full of despair because, like so many of us, he doesn’t really know what he’s looking for, meaning he’s probably never going to find it.

Fellini knows how to shock an audience, not by what he shows, but the false sense of security he instills in the audience before throwing a narrative sucker punch. At certain points in the story, Marcello meets friend and fellow writer Steiner (Alain Curry), one of the few people he admires because Steiner seems to have everything Marcello wants: Wealth, professional respect, a beautiful wife and two loving children. Not to give anything away, but what happens to Steiner late in the film leaves Marcello - and perhaps the audience - completely disillusioned, somewhat exacerbated by the apathetic presence of the paparazzi, Marcello’s leechlike sycophants throughout the film.

Finally, La Dolce Vita is always visually interesting. From the very first scene - a statue of Jesus being transported via helicopter to the Vatican - the city of Rome and its nightlife locations are almost secondary characters. Furthermore, I’ve seen few films of the era that utilize black & white more effectively. In terms of tone and theme, the film would not have had the same impact if presented in color.

I believe it was Lauren Bacall who once said, “It’s not an old film if you’ve never seen it,” and indeed, there are many aspects of La Dolce Vita - visually and narratively - that are new to me. With its daunting running time, there’s a lot to unpack here - some of which remains almost frustratingly ambiguous - but it’s an easy film to appreciate and a fine introduction to Frederico Fellini.

That’s a newbie’s take, anyway. As for the disc itself, La Dolce Vita has been previously released by Criterion Collection with a huge batch of bonus features. Other than Scorsese’s introduction, this one contains no supplemental material, but it’s more widely available, a hell of a lot cheaper and the transfer is terrific.