THE SPINE OF NIGHT (4K) and the Familiar Path 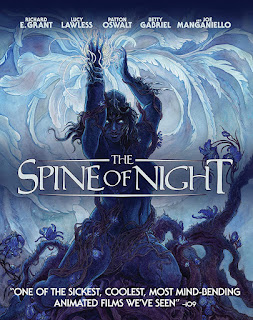 I’ll give directors Morgan Galen King & Philip Gelatt props for one thing: Though naked throughout the entire film, lead female character Tzod (voiced by Lucy Lawless) isn’t rendered as yet another ridiculously-voluptuous, iron-boobed adolescent sex fantasy. She’s sort of a Plain Jane, a tad on the hefty side and - like most of us - would look better if she threw on some clothes. In other words, she’s plausible.

In fact, The Spine of Night is loaded with male and female nudity, none of it even remotely sexual or titillating.

Elsewhere, the directors also wear their influences proudly. The film is clearly inspired by the work of Ralph Bakshi and such other bygone relics as Heavy Metal, achieving a similar aesthetic by using the same rotoscoping process for its animation. While I’ve personally never been a fan of rotoscoping, those with an appreciation for the craft might find The Spine of Night to be a visual feast.

But although it’s an obvious labor of love, the film is never particularly engaging. The overall story arc involves a type of flower that gives those who seek it almost unlimited power, but the episodic structure precludes any real investment in the characters, all of which are drawn - visually or otherwise - in broad, bland strokes. And with the exception of a wonderful creation myth segment that serves as sort of a backstory, the film treads awfully familiar narrative ground.

Despite attempts to liven things up with buckets of gore, The Spine of Night mostly ends up being a plodding checklist of time-honored adult fantasy tropes. The filmmakers’ sincerity is admirable, but an atypical protagonist notwithstanding, it adds nothing to the genre that hasn’t been done before.

THE MAKING OF THE SPINE OF NIGHT - A 30-minute behind-the-scenes doc that’s actually more interesting than the movie.