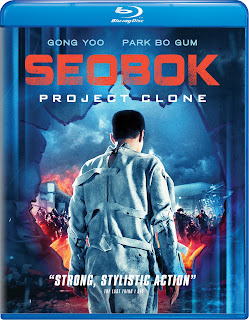 Around this house, the arrival of Seobok: Project Clone on Blu-ray was a big deal indeed.

Not because of the concept, although it’s a solid, reliable foundation for an intriguing story. In this one, Min Gi-heon (Gong Yoo) is a cynical ex-intelligence agent - and dying of a brain tumor - who’s coerced back by his ruthless old boss, Ahn (Jo Woo-jin), to escort the first human clone out of Korea. That clone, Seobok (Park Bo Gum), is almost childlike, despite being in his twenties. He’s never experienced life outside of the facility where he was created.

Nor was it for the action, though there’s certainly plenty of that. Ahn wants Seo Bok destroyed before he falls into the wrong hands. At the same time, the greedy chairman of the facility essentially wants to dissect him because, not only is Seo Bok developing powerful telekinetic abilities, his DNA might contain the secret to immortality. Though initially concerned with protecting Seo Bok because it could save his own life, Min ends up being the only one who sees him as a human being. This leads to a road trip/chase with fighting, gunplay, mind-over-matter mayhem (courtesy of Seo Bok) and plenty of soul searching by Min.

No, the main reason the movie is a big deal is because my wife's a die-hard Gong Yoo fanatic. She first fell in love after discovering him in K-dramas and has since dug into all-things Yoo, including Train to Busan, even though zombie movies aren’t really her thing, and the recent Netflix sci-fi series, The Silent Sea. While I don’t share the same twitterpated devotion as my wife, Yoo’s low-key, tough-but-tender style certainly suits Min, since the character isn’t too far removed from the redemption-seeking dad in Train to Busan. It’s an affecting performance, especially during moments which see him reluctantly becoming something of a father figure for Seo Bok.

The film itself is a well assembled amalgamation of sci-fi, action, road movie and a dash of buddy comedy. Seo Bok’s skills are similar to those depicted in Scanners, though he’s capable of going full X-Men when pushed too far. Speaking of which, the action is deftly handled, bolstered by some impressive special effects, particularly during the climax which pits Min and Seo Bok against…well, pretty much everybody. The combined story elements don’t result in anything particularly original, but the protagonists earn our investment and the bad guys - though broadly drawn - are suitably hateful, so the film is constantly engaging, right down to the poignant denouement.

While I’m certain my wife would be content to watch her hunky heartthrob read a dictionary, Seobok: Project Clone is more than just the Gong Show. As demonstrated in other films and series, he’s a plausible action hero, but not the whole reason this film works as well as it does. Solid direction, tight pacing and strong characters keep things interesting despite a narrative that often charts familiar territory.

FEATURETTES - “Making of Seobok”; “The Characters”