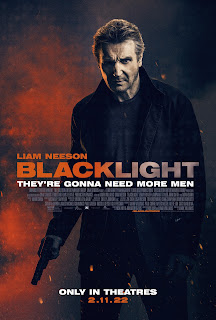 Ever since 2008’s Taken, the continuing onslaught of movies featuring Liam Neeson as a geriatric asskicker has become something of a running gag. However, I still appreciate them, even some of the goofier ones (like The Ice Road). Part of that might be because I’m nearing the age when he began displaying such latent badassery, but also because he’s become sort-of a 21st century Charles Bronson.

Most of Bronson’s post-’60s career consisted of modestly-budgeted action flicks that never approached high art - even within the genre - but were reliably entertaining. And until the dreaded Cannon years, fans of ol’ Chuck rarely walked away disappointed. Neeson has more-or-less taken the mantle, cranking out a similar brand of middle-aged mayhem.

However, I’m wondering if Neeson might be entering the Cannon Films phase of his own action career, because Blacklight is a listless, formulaic bore.

Neeson plays Travis Block, an obsessive-compulsive who does a lot of the FBI’s dirty work. He’s tasked with bringing in rogue agent Dusty Crane (Taylor John Smith), who seemingly snaps during a routine encounter with cops and later escapes Travis’ custody. However, Dusty is actually trying to blow the whistle on FBI director - and Travis’ oldest friend - Gabriel Robinson (Aidan Quinn), who has set-up “Operation Unity,” a program that targets and assassinates innocent people. While attempting to provide local reporter Mira Jones (Emmy River-Lampman) with evidence, Dusty is murdered by two of Robinson’s thugs. Now Travis must use his particular set of skills to…

…well, you know the rest. It’s what we signed up for. But unfortunately, Blacklight is indifferently conceived and woefully predictable, right down to clumsily contriving family members for Travis to worry about. There are a couple of decent - albeit implausible - action sequences, but they serve an poorly-structured narrative that lays all its cards on the table in the first 45 minutes. After that, Travis and Mira simply move from one crisis to another, with no attempt at additional plot developments or surprises.

It ain’t Neeson’s fault, though. As yet-another age-defying, one-man wrecking crew, he’s earnest and likable. But this time, it’s not enough to lift Blacklight above mediocrity. Though competently assembled (‘assembled’ is definitely the right word) everything about the film is hopelessly generic.