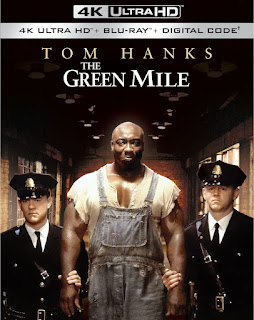 One of the more enduring adaptations of a Stephen King novel, The Green Mile gets a long awaited 4K upgrade. Both the audio and video are a significant improvement over previous Blu-ray editions (and there’s been a lot of them). The image is sharper, with a lot more clarity and detail in every scene. The film sounds great, too, with a Dolby Atmos remix for better overall balance.

As for the movie itself, I’ve always considered The Green Mile sort of an oddity among King-based works. There’s arguably no better director at adapting King than Frank Darabont. Whether it's a horror story or not, his films capture the overall spirit and tone of the original novels while still remaining mostly faithful to the source. When he does make changes to the story, they’re often an improvement over what King originally wrote.

But what makes The Green Mile something of an anomaly even within Darabont's filmography is its daunting length. With a running time usually reserved for art films and sprawling epics, The Green Mile is neither. It’s a unique combination of realism and fantasy, the latter of which isn’t even introduced to the narrative for nearly an hour, with virtually no foreshadowing. A more pragmatic director would have trimmed things up by an hour and still told the same story. But because Darabont allows the characters and story considerable breathing room, each scene becomes a bit more immersive.

Though The Green Mile never quite reaches the emotional heights of The Shawshank Redemption - to which it is most often superficially compared, for obvious reasons - it thoroughly (obsessively?) retains almost every aspect of the original novel. More than any other King adaptation that isn’t a two-parter or miniseries, we feel like we’re watching the entire book unfold on-screen.

In addition to the new 4K restoration, this set includes the original Blu-ray version and a huge batch of vintage bonus features. But being that there’s no new supplementary material, it’ll only be of interest to those looking to upgrade the movie itself.

WALKING THE MILE: THE MAKING OF THE GREEN MILE - A shorter version of a previously released feature-length doc.