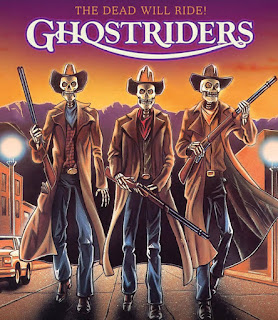 Maybe you know a guy who regularly claims the 1980s were the “golden age” of horror, waxing nostalgic about weekends spent in the horror section of the local video store. While those were indeed good times and horror was undoubtedly a booming market, the reality is a vast majority of those films were regionally-produced, homegrown flicks cranked out by would-be auteurs armed with more ambition than resources...or talent.

So for every genuine cult classic name-dropped by your ‘80s-obsessed friend, there were dozens - even hundreds - of movies like Ghostriders...grown and grass-fed in great state o’ Texas. Not a good film by any stretch of the imagination, it’s nevertheless an admirable example of the can-do spirit required of anybody trying to sneak into the movie business through the cellar window.

Maybe some of you reading this are that guy who walked out of Blockbuster every Friday night with an armload of fright flicks chosen for their lurid cover art or aggrandizing synopsis. Since Ghostriders checks off both boxes, there’s a chance you might carry a nostalgic torch for this one.

If so, you’re already well-aware the so-called “ghosts” of the title look more like a well-fed western bar band than undead spirits; and that the primary cast of non-actors spend half the film walking around some Texas grassland outside of Austin; and that much of the story was based on the resources the producers had on-hand at any given time, which explains the bi-plane scene and a grasshopper’s unfortunate encounter with a wolf spider (tossed into its web by one of the producers!).

And you probably wouldn’t have it any other way. There’s an earnestness behind this budget-conscious backwoods bonanza that’s kind of charming. We walk away with the impression that once filming wrapped, everyone involved with Ghostriders celebrated with a cookout and a case of Lone Star. They may not have made a good movie, but at least they made a movie. How many of us can claim as much?

Today, Ghostriders is sort-of like revisiting the good ol’ pre-Netflix days, when we were more motivated to see a film through to the end because…hey, we paid for it. Moreover, it’s indicative of what mostly awaited us on video shelves during horror’s so-called “golden age.”

In addition to a pretty good restoration, this disc is given a nostalgic boost with some new & vintage bonus features, including an entertaining look back by writer/producer James Desmerais and DOP/producer Thomas L. Calloway, the latter who confesses hastening the death of that poor grasshopper.

BRINGING OUT THE GHOSTS: THE MAKING OF GHOSTRIDERS - A new, very interesting doc featuring the producers, who provide many entertaining anecdotes about their efforts to get the film made. Easily the best of the bonus features.

LOW BUDGET FILMS: ON THE SET OF GHOSTRIDERS - Vintage documentary.