😺IN THE HEAT OF THE NIGHT on 4K 4/19 from Kino Lorber
This masterpiece from director Norman Jewison (The Thomas Crown Affair) is one of the most radical and acclaimed movies of its generation. Rod Steiger (A Fistful of Dynamite) gives an Oscar-winning performance as a sheriff from small-town Mississippi who finds himself in an uneasy alliance with a black homicide detective from Philadelphia—strikingly portrayed by Sidney Poitier (Lilies of the Field). In the course of investigating the crime, the two strong-willed men must reconcile their inherent prejudice towards each other. The final result is justice—and an unlikely but touching mutual respect. Winner of five Academy Awards including Best Picture, Best Adapted Screenplay and Best Editing for Hal Ashby, In the Heat of the Night is a blistering commentary on race relations and a landmark in entertainment. Includes several new and vintage bonus features, as well as the sequels, THEY CALL ME MISTER TIBBS! (1970) and THE ORGANIZATION on Blu-ray. 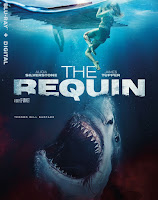 🦈THE REQUIN on Blu-ray + DVD 3/29 from Lionsgate
There’s terror in paradise when Jaelyn (Alicia Silverstone) and Kyle (James Tupper) arrive at a remote seaside villa in Vietnam for a romantic getaway. A torrential storm descends, reducing the villa to little more than a raft and sweeping the young couple out to sea. Suddenly, another danger appears: a school of great white sharks. With her injured husband watching helplessly, Jaelyn must battle the deadly predators alone in this tense thriller that rides an unrelenting wave of fear. The suspenseful horror-thriller The Requin arrives on Blu-ray™ + Digital and DVD March 29 from Lionsgate. The film follows a couple’s romantic getaway that goes awry after finding themselves at sea in danger of killer sharks.  Directed and written by Le-Van Kiet (Furie). 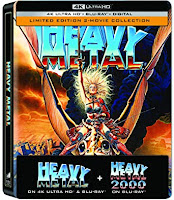 😺HEAVY METAL 4K Blu-ray SteelBook Edition Coming 4/19 from Sony
Based on the fantastical illustrated magazine HEAVY METAL, producer Ivan Reitman enlists the help of some of Hollywood's animation masters to create the otherworldly tale of a glowing green orb from outer space that spreads destruction throughout the galaxy. Only when encountered by its one true enemy, to whom it is inexplicably drawn, will goodness prevail throughout the universe. Richly and lavishly drawn, the vignettes of the orb's dark victories include the character voices of John Candy, Harold Ramis and a pounding soundtrack by Black Sabbath, Blue Oyster Cult, Cheap Trick, Devo, Donald Fagen, Don Felder, Grand Funk Railroad, Sammy Hagar, Journey, Nazareth, Stevie Nicks, Riggs, and Trust. Highly imaginative and full of surprising special effects, HEAVY METAL set the standard for alternative contemporary animation. An intoxicating experience not to be missed! Includes in ALL-NEW RETROSPECTIVE DOCUMENTARY AND THE SEQUEL, HEAVY METAL 2000, on Blu-ray.

😺DR. PHIBES DOUBLE FEATURE on Blu-ray 4/12 from Kino Lorber
THE ABOMINABLE DR. PHIBES (1971) Meet Doctor Phibes: a one-time concert musician who’s now an all-time crazed murderer. In this clever, crypt-kicking classic, horrormeister Vincent Price plays a diabolical doc seeking the ultimate in revenge with precision creepiness and surgical wit. Watch Dr. Phibes live up to his promise: “Nine killed her, nine shall die, nine eternties in doom!” After a team of surgeons botch his beloved wife’s surgery, leaving her for dead, the emotionally distraught Dr. Phibes creatively concocts a fatal prescription for revenge.DR. PHIBES RISES AGAIN (1972) The eminent Dr. Phibes (Price) awakens from a decade of suspended animation and heads to Egypt with his mute aide-de-camp Vulnavia and the corpse of his dead wife. To resurrect his spouse, Phibes gets up to his usual, diabolical tricks: cleverly murdering people in strange and heinous ways to invoke a magical incantation.

🐙TENTACLES on Blu-ray 4/12 from Kino Lorber
It’s angry. It’s hungry. It’s extremely well-armed—and it’s descending on a small seaside town to sample the local cuisine! When a giant, bloodthirsty octopus emerges from the deep, John Huston (Winter Kills), Shelley Winters (Bloody Mama), Bo Hopkins (White Lightning) and Henry Fonda (Meteor) do all they can to keep the marine menace from turning their sleepy village into a one-stop snack-shop. Cult movie maven Ovidio G. Assonitis, the twisted mind behind Beyond the Door, The Visitor, Madhouse and The Curse, serves up a slimy scare-fest with a pounding score by Italian genre great Stelvio Cipriani (A Bay of Blood). It’s a fast-paced thriller that’ll grip you with relentless terror—and never let go! Tentacles features a top-notch score by the great Stelvio Cipriani (Kidnapped, What Have They Done to Your Daughters?).
Posted by D.M. Anderson at 1:06 PM