Revisiting ESCAPE FROM L.A. in 4K 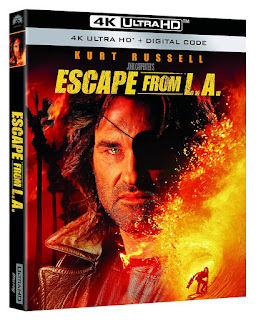 “Honey, could you PLEASE turn that down?”

This came from my wife, who was upstairs in the living room while I was down in the Dave Cave reviewing Escape from L.A. She actually had to ask more than once, the last time not-so-much a question as a final warning. The thing is, I don’t think I really had it that loud, but if nothing else, the audio of this 4K disc pumps out some serious low-end thunder during key action scenes. It was almost like watching the film in Sensurround (you kids might have to Google that term).

I also gotta say this video presentation is equally impressive, offering Escape from L.A. in all its goofy, cut-rate-CGI glory. The overall image is clearer, more detailed and definitely more colorfully vibrant than the original DVD release (sorry, I’ve never seen it on Blu-ray to draw any kind of comparison). If premium picture and sound quality are one’s primary motivation for upgrading, this disc certainly passes muster. But unfortunately, aside from the trailer, there’s no supplementary material for those hoping to dive deeper.

As for the movie itself, my appreciation for Escape from L.A. has grown over the years. Back in ‘96, I took my wife to see it on opening night. Not only was I a huge fan of the original Escape from New York, but since director John Carpenter was in kind-of a creative slump at the time, I went in thinking this could signal a return to the greatness of his early-80s heyday. But while it was certainly fun seeing Kurt Russell as Snake Plissken again, I felt the film was just an unimaginative retread of the original, loaded with phony effects and campy self-parody (Snake surfing down Wilshire Boulevard???). While it was okay, those of us who spent 15 years pining for a sequel expected a lot more than simply okay. It was like Carpenter shit all over the legacy of one of his most beloved films with self-aware smarm.

But you know what? Like other Carpenter films that became latent cult classics, time has been fairly kind to Escape from L.A. Snake Plissken remains one of exploitation cinema’s greatest, most nihilistic antiheroes, and with hindsight, there was nothing Carpenter or Russell could add to the character that was gonna make him even cooler. So why not have a little fun with his image itself? Additionally, there’s a bit of demented genius behind the decision to use a nearly identical scenario as a springboard for social, political and cultural satire - heavy-handed as it is - with Plissken serving as a bemused observer. Even Shirley Walker’s playful score underlies the film’s subversive attitude.

As for the amusingly archaic CGI (still a bone of contention for some), I’d argue that Escape from New York’s special effects weren’t exactly stellar either, but we didn’t care because the main character was such an indelible onscreen presence. That same character carries this film, too, and Russell looks like he had a blast bringing Snake back for another go-round. We get the impression Kurt missed him as much as we did.

None of this is to say Escape from L.A. is a great film. It’s still reflective of a director whose best years were behind him. But looking beyond the wonky effects, rehashed story and ridiculous action sequences, we still have Kurt Russell in his prime and a story that’s a bit smarter than we might remember…with certain aspects which turned out to be somewhat prophetic (such as depicting the President as a dangerous, narcissistic lunatic).