THE FLAG OF IRON: Looks Are Everything 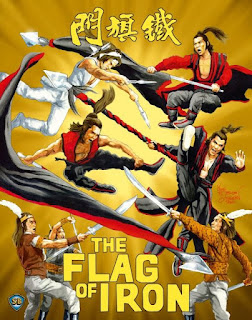 The ‘Venom Mob’ was a group of martial arts actors who regularly appeared in a variety of Shaw Brothers films during the late ‘70s and early ‘80s, which I was previously unaware of. If The Flag of Iron is indicative of their work, these guys are better athletes than actors.

However, that athleticism is pretty jawdropping. Whether using spears, swords, fists or furniture, their skills are displayed front and center, both in real time and slow motion. Anything resembling thespian skills - and the plot, for that matter - are comparatively insignificant.

Still, there is sort of a plot. When the Iron Flag clan clashes with rivals, their master is murdered by an assassin known as “The Wanderer.” One of the clan brothers, Lo, goes into exile, where he ends up fighting a variety of flamboyant killers, all working for the same person who hired the Wanderer to kill his master. Later, the Wanderer himself shows up to inform Lo he was hired - under false pretenses - by one of the Iron Flag brothers. That’s when Lo, Brother Yun and the Wanderer himself return home to avenge the betrayal.

Ultimately though, the story is just a clothesline on which to hang gobs of fight scenes, all of which feature stunning choreography…ballets of bodies, blood and brawls. Bolstered by flamboyant costume design, vivid color and amusingly histrionic dialogue, The Flag of Iron bombards the viewer with enough aesthetic fun that we don’t concern ourselves with complexity, logic or the Venom Mob’s acting skills.

While this disc doesn’t include much in the way of bonus features - at least compared to other recent Shaw Brothers movies released by 88 Films - it boasts a pretty decent HD remaster, as well as a double-sided poster with new and original artwork.