EDGE OF DARKNESS and a Bit of Norwegian Payback 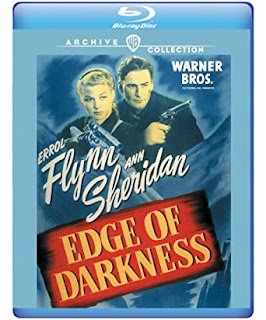 Edge of Darkness isn’t one of the most-remembered films Errol Flynn did in the ‘40s, but it’s arguably one of the better ones.

That’s not necessarily due to Flynn himself. With all due respect, Flynn was always more of a movie star than an actor, so while he’s suitably stoic as Norwegian resistance leader Gunnar Brogge, it’s the writing, direction and terrific ensemble cast that make the film intensely gripping.

The story takes place during World War II in a small Norwegian fishing village occupied by Nazis, commanded by coldblooded Captain Koenig (Helmut Dantine, in a chilling performance). With the town’s safety, livelihood and freedom at stake, some of its citizens are quietly planning a revolt using weapons promised by the British. Brogge becomes the de facto leader of the movement, assisted by love-interest Karen Stensgard (Ann Sheridan), much to the chagrin of her father, Dr. Martin Stensgard (Walter Huston), who feels Brogge’s recklessness endangers his daughter. Like a few others in the village, he’d rather remain neutral.

Still-others capitalize on the Nazi’s presence for their own personal gain, such as greedy cannery owner Kaspar (Charles Dingle) and Karen’s own self-serving brother, Johann (John Beal), who’s suspected of being a ‘quisling’ (someone who essentially rats-out their own people). Much of the first two acts establish the characters and depict the resistance preparing to carry out the revolt (which Brogge is impatient to start, especially after Karen disappears), while Koenig grows increasingly ruthless. This leads to a stunning - and surprisingly violent - clash once the townspeople have been pushed too far.

Edge of Darkness hooks the viewer right away by showing the aftermath first, the town strewn with hundreds of corpses, which leads us to believe such a slaughter left no survivors. Flashing back, the narrative takes its time establishing the plot and characters, which is important to assure the viewer’s investment in their plight, so by the time the bullets start flying, we’re more than ready for some swift Norwegian payback and are rewarded by a rousing climax filled with taut action.

Even though Flynn is top billed, he’s simply one part of a uniformly excellent cast. Elsewhere, Edge of Darkness is aptly titled, somber in tone and occasionally infuriating when depicting injustice at the hands of the Nazis, as well as the betrayal perpetrated by one key character.

“TO DUCK…OR NOT TO DUCK” - Looney Tunes short, with Daffy Duck & Elmer Fudd.