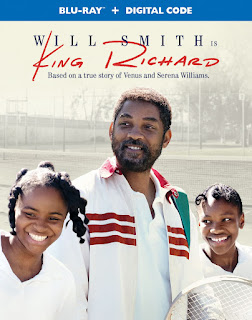 Like everyone else, I’m well-aware of tennis terminators Venus & Serena Williams and their impact on the sport. But being a casual observer, I didn’t know who their father was, even though he - along with beleaguered wife ‘Brandy’ (Aunjanue Ellis) - are pretty much the main reason his daughters were able to escape Compton, slaughter their competition and adorn Wheaties boxes, becoming cultural icons along the way.

Since the Williams sisters’ lives have more-or-less unfolded in the public eye, making a movie about them seems rather redundant. Richard, on the other hand, is another matter. Not only was he a somewhat controversial figure, his seemingly single-minded obsession with guiding his girls to greatness is both inspirational and infuriating. King Richard does not depict Williams as a selfless underdog. His heart is in the right place and not-once do we question his love for his family, but he’s often overbearing, stubborn and self-aggrandizing, basking in media attention more than he probably should.

As the narrative unfolds, Richard also appears to be the main obstacle holding his girls back, Venus, in particular. His growing lack of humility and unwillingness to listen to others threatens to alienate everyone close to him, and despite his dedication, there’s a point where we aren’t even sure we like the man. But in a single, wonderfully-realized scene where Richard is telling a distraught Venus of a harrowing moment from his own childhood, we suddenly understand him. It’s the best, most heart-warming/breaking moment in the entire film and Smith absolutely nails it.

Smith’s performance is terrific because he finally disappears into a character, while Elle matches him step for step as Brandy, Richard’s moral compass and the most empathetic character in the film. Saniyya Sidney (Venus) and Demi Singleton (Serena) are also excellent, though their characters aren’t as well-rounded. But since this isn’t really their story, I suppose that’s to be expected. As tennis coach Rick Macci, Jon Bernthal makes a congenial foil for the more headstrong Richard, putting up with a ton of the man’s bullshit.

Elsewhere, King Richard is a bit overlong and sometimes meandering, particularly during the climatic tennis match between Venus and Arantxa Vicario. Considering it’s mostly been Richard’s story up to this point and the ending is a foregone conclusion, the final act could have been trimmed up a bit and had the same emotional impact. Still, this is a solidly entertaining film with a career-best performance by Will Smith.