SHATTERED: Another Girlfriend from Hell? 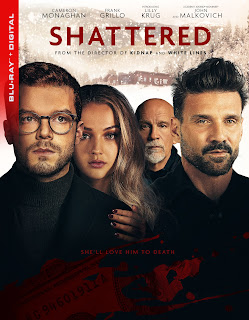 But I gotta admit I enjoyed Shattered more than I wanted to, maybe because it isn’t quite “in the tradition of Fatal Attraction,” as the cover synopsis boasts.

In this one, the lonely guy is Chris (Cameron Monaghan), a millionaire in the midst of a divorce who lives in a secluded, high-tech mountain home. Then he meets beautiful woman Sky (Lilly Krug), who charms the pants off him (literally). When they aren’t together, Sky and a roommate are living in a seedy hotel managed by crusty old horndog Ronald (John Malkovich). While Chris and Sky are out one night, he’s attacked by a car thief, breaking his leg. Sky happily moves in to take care of Chris. Shortly afterwards, the roommate ends up dead, supposedly from suicide. But we know better, don’t we?

Even if we didn’t, Sky is more than willing to clear the air, informing Chris she killed her roommate. Then she imprisons him in his own home, subjecting him to a variety of torments. However, Sky has an actual agenda that has nothing to do with unhealthy infatuation. Using torture to get access to his accounts, she plans to bilk Chris of everything he has. She ain’t working alone either. Sleazy mentor and stepfather Sebastian (Frank Grillo) arrives later to help finish the job.

Shattered contains more than its fair share of implausibilities, sometimes straining credibility to the breaking point, but at least we’re spared the same old psycho lover routine. Neither Chris nor Sky are particularly interesting - even when bumpin’ uglies - because they feel like patchwork composites of characters in similar films, nor are the actors able to breathe much new life into them. Grillo, however, seems to be having a great time. The less said about Malkovich’s embarrassing role, the better.

But despite its shortcomings, the story isn't half bad. At the very least, it’s engaging enough that we’re compelled to see it through (even if we kinda see where everything’s heading). Bolstered by a few bursts of explicit sex & violence for the yahoo crowd, no one’s likely to walk away from Shattered thinking they’ve just seen a great film, but it’s okay in the moment.

“MISCHIEF IN THE MOUNTAINS: THE STORY OF SHATTERED” - Labeled as an interview with director Luis Prieto, it also features most of the primary cast.