THE CAPTURE: South of the Border Noir 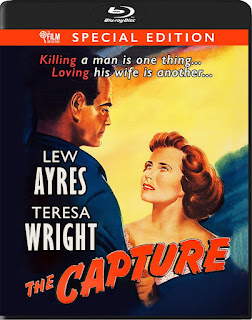 My appreciation for director John Sturges came pretty late in life, when I eventually noticed that his name popped up in a lot of old classics I've always loved, like Bad Day at Black Rock, The Magnificent Seven and The Great Escape, as well as kitschy potboilers like The Satan Bug and Ice Station Zebra. So whenever the chance to discover another one turns up, deal me in.

This time it’s The Capture, one of Sturges’ early, lesser known films. Though not among his best work, it’s a fairly entertaining stab at south-of-the-border noir. Lew Ayres stars as Lin Vanner, an oil drilling manager who single-handedly hunts down and shoots Sam, a man who allegedly robbed the company payroll. Sam claims he’s innocent and tried to surrender, but couldn’t raise both hands because of an injury. When he later dies, guilt over the incident drives Vin to quit his job and start a new life elsewhere…

…which happens to be in the same hometown as Sam's widow, Ellen (Teresa Wright). But even though they eventually fall in love (!), Vin can’t completely let go of the past, not just because he was responsible for Sam’s death, but the circumstances surrounding the robbery suggest the man might have been innocent after all. His investigation leads to his former boss, Earl Mahoney (Barry Kelley). When a violent scuffle results in Mahoney’s death, Vin becomes a fugitive.

Told in flashback, the narrative features some effective film noir touches, such as Ayres’ narration (though he sounds a lot like Jack Lemmon), as well as Vin making numerous ill-advised decisions, like hooking up with Ellen in the first place. Speaking of which, their initially acrimonious relationship developing into romance is a tad hard to swallow and occasionally meandering, but once Vin goes on the run, Sturges delivers some hard-boiled action and suspense (which was always his comfort zone).

Ayres is good in the lead, while the always reliable Wright has a few nice moments in a comparatively thankless role. I suspect Sturges is more of a director-for-hire here, but like most of his pictures from this era, The Capture is well made and efficiently paced. While the film doesn’t rank among his classics, it’s solidly entertaining.

FEATURETTES - “Teresa Wright: The Actress Next Door”; “John Sturges: Man of Action” (as a big Sturges fan, I wish this was longer).

SUPPLEMENTAL BOOKLET - Includes an essay, “Not Quite Picture Perfect,” mostly about Teresa Wright’s marriage to The Capture writer-producer Niven Busch.