You've Probably Seen LAST SHOOT OUT (Even if You Haven't) 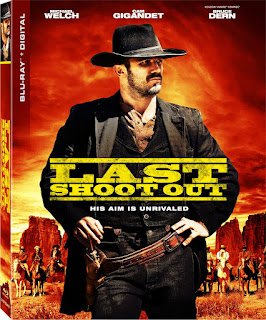 Be advised…not even five minutes into Last Shoot Out, someone actually says, “Howdy, pilgrim.”

It’s just the first in an assembly line of western cliches & tropes that make up the entire film, including the plot: a lone gunslinger with a dark past who comes to the aid of a woman trying to escape her husband and his murderous family, whom she learns - on her wedding day, no less - killed her father. So chances are you've already seen Last Shoot Out without actually watching it.

And the badass man in black on the cover? Not the hero. One could even argue he’s not the primary villain. It’s Cam Gigandet, who apparently earned a spot out-front by virtue of appearing in some movies you’ve actually heard of (the Twilight franchise, The Magnificent Seven). Though Cam shares above-the-title billing with fellow Twilight alumni Michael Welch and living legend Bruce Dern, the aforementioned lone gunslinger is actually played by a guy named Brock Harris, whom you might remember from…well, probably nothing.

Still, I kinda liked this movie.

Sure, we suspect the closest most of these folks have ever been to a real horse was playing Red Dead Redemption (except Dern, of course). And yeah, making a last stand at a remote outpost - surrounded, outnumbered & outgunned - is one of the most reliable climaxes in the history of westerns. And of course, said-outpost looks more like it was constructed on a backlot somewhere.

But you know what? So were most of the low-budget oaters from the ‘50s that were prolifically punched-out using the leftovers of bigger movies. Despite lacking stars like John Wayne or directors like John Ford, a lot of those humble horse operas were unpretentious fun. Viewed with tempered expectations, Last Shoot Out is similarly enjoyable.

We may not know who the hell Brock Harris is, but he gives an earnest performance, while Welch & Gigandet make the most of their one-note characters. Dern is..well, Bruce Dern, required to do little more than be cantankerous (which no one does better these days). Efficiently directed and running a lean 86 minutes, Last Shoot Out will never be mentioned in the same breath as Shane - or even a Gunsmoke episode - but I’ve seen worse bargain counter westerns.