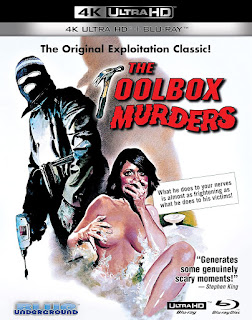 The most famous scene in The Toolbox Murders is also its most disturbing, in which a beautiful young woman (Kelly Nichols) is pleasuring herself while taking a bubble bath, just before being chased around her apartment and killed by a madman with a nail gun. As suspenseful as it is titillating, what ultimately makes it so unnerving is the song playing in the background, a haunting, country-tinged ballad written specifically for the scene. The striking contrast between what we see and hear gives the entire sequence a visceral power that the remainder of the film doesn’t come close to achieving.

That scene is arguably a big reason The Toolbox Murders became one of the more notorious American exploitation films of the ‘70s. But time has not been quite as kind to this one as, say, The Texas Chainsaw Massacre (Toolbox’s most obvious inspiration). Perhaps many of us have forgotten that most of the murders occur in the first 20 minutes, with the masked killer lugging around his trusty tool kit to dispatch several women in a suburban apartment building. For the most part, those scenes remain pretty effective, their lack of style or polish rendering them a bit harsher than your typical slash-fest (though seldom as graphic as the film’s reputation suggests).

However, things slow to a crawl once it settles into the story, mostly the search for Laurie (Pamelyn Ferdin), a teenage girl kidnapped by the killer. Veteran bad-guy Cameron Mitchell and TV heart-throb (at the time) Wesley Eure add some zest to their unhinged characters, but everyone else is dull as dishwater, exacerbated by drab performances and terrible dialogue. Even the cops are inconsequential to the plot, with Laurie’s brother doing most of the legwork (at least until he’s set on fire). Still, our patience is somewhat rewarded by a climax that’s alternately goofy and disturbing.

Admittedly, part of the film’s cult appeal at the time might have been the participation of TV stars not typically associated with exploitation cinema, but it’s ultimately the murders that make the movie (well, that and Ms. Nichols’ date with Mr. Bubble). As such, this new 4K UHD release will be of considerable nostalgic appeal for those who fondly recall the golden age of grindhouse. Newly scanned, the outstanding overall picture and sound quality belies the film’s age. This is probably the best The Toolbox Murders has ever looked, even in theaters. The disc is also loaded with a generous batch of new & vintage bonus features which are not-only entertaining, they provide considerable historical context.

DRILL SERGEANT - Interview with director Dennis Donnelly, mostly a TV director who was obviously grateful for the opportunity (this was his only feature film). He offers a lot of fond memories of his career and the shoot.

TOOLS OF THE TRADE - Interview with actor Wesley Eure. He’s extraordinarily enthusiastic, and sometimes quite funny.

SLASHBACK MEMORIES - Journalist David Del Valle discusses Cameron Mitchell’s long career. This is, by far, the most interesting and amusing of the new interviews.

“THEY KNOW I HAVE BEEN SAD” - Video essay by Amanda Reyes (with a few comments near the end by Chris O’Neill).

I GOT NAILED IN THE TOOLBOX MURDERS - Archival interview with Marianne Walter (aka Kelly Nichols).