ENCANTO and the Magic Playbook 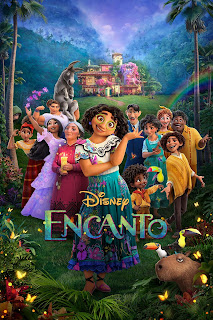 Add Encanto to your collection now on Digital and on 4K, Blu-ray and DVD February 8.
ENCANTO (Digital Review)
2021 / 102 min

One reason Disney’s animated films continue to outclass those from most other major studios - especially during the last decade or so - is they know a great concept ain’t enough. Nor are Oscar baiting songs…or state-of-the-art animation. The fact that Encanto has all of those things is beside the point.

Disney knows the same stuff that matters in regular films is equally vital to animation…uniquely-rendered & engaging characters, contextually-believable dialogue and respect for the intelligence of the audience (no matter what age they are). Additionally, many of their recent films have displayed an acute awareness that it’s actually a large world after all. Encanto not-only immerses us in Colombian culture, we get the impression that what we see and hear is pretty authentic…very much like the studio did with Moana.

So who cares if the story itself is right out of the Disney playbook, especially when it’s presented with such charm, wit and reverence for its characters? Teenager Mirabel Madrigal (Stephanie Beatriz) makes a relatable protagonist as the only member of her family not to be blessed with a spiritual “gift,” some kind of unique ability bestowed on the others (represented by magical doors leading to ‘rooms’ where their gifts flourish). The rest of the village regularly depend on the Madrigal family’s various gifts, meaning Mirabel feels inadequate.

However, the family’s abilities, unity and even the house itself begin to weaken as Mirabel’s search for her own special gift has her opening the long-dormant door of Bruno (John Leguizamo), an uncle whose gift of seeing the future had him disowned by the family. It turns out he still lives within the walls of the house. Meanwhile, the Madrigals' matriarch becomes dismayed at Mirabel’s supposedly destructive influence on the other family members, whom she’s been encouraging to live for themselves, not to someone else’s expectations.

The situations, emotions and conflict are actually much more complex than that, but the gist of the story is familiar, one that Disney has pretty-much mastered. Encanto manages to make it all feel new, with wonderfully-rendered characters, terrific music, subtle moments of poignancy and, of course, brilliant animation. If there’s one fault in the film, it would be the coda, which sort of lessens the impact of the inspirational, heart-tugging resolution. Not a lot, mind you, but enough that we notice that the moment is wholly unnecessary.

Still, Encanto is massively entertaining, easily the best animated film of the 2021. Not taking Pixar’s movies into account, it might be Disney’s best since Zootopia. Despite walking a familiar narrative path, only a cold-blooded cynic wouldn’t enjoy such a journey.

SING ALONG OPTION - With on-screen lyrics.

SONG SELECTION - You can also jump to any of the eight featured songs, with on-screen lyrics.

“FAR FROM THE TREE” - Animated short.

INTRODUCTION TO “FAR FROM THE TREE” - By writer-director Natalie Nourigat.

FAMILIA LO ES TODO - Probably the most interesting of the bonus features, this 3-part doc features some of the creators of the film and members of “Familia,” a cultural trust who share their experiences which in-turn inspired the characters.

A JOURNEY THROUGH MUSIC - 3-part documentary about the songs and score.

OUR CASITA - 2-part doc about the creation of the colorful house, which is essentially a supporting character.