AMITYVILLE UPRISING: "For God's Sake, Watch Something Else" 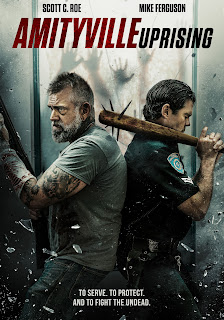 Writer-director Thomas J. Churchill himself has belched-out three of ‘em, the most recent being Amityville Uprising. In this one, America’s favorite horror haven is rocked by a phony CGI chemical explosion at a military base. It eventually results in acid rain that turns people into flesh-eating zombies. I say ‘eventually’ because another 40 minutes pass before we see anyone return from the dead.

Until then, the film is an interminable barrage of drab exposition, obnoxious characters, ridiculous dialogue and lousy performances by a cast you’ve likely never heard of. When the undead finally do show up, it’s usually one or two at a time, attacking characters who stupidly, and repeatedly, manage to get separated from the others. Reflective of the budget, the entire film takes place in a single location - a small police station - yet despite the close quarters, no one hears any victims’ blood-curdling screams just a few doors down.Some not-half-bad make-up effects can’t offset the scattershot pacing, laughable lapses in logic and a complete lack of style or purpose. Once everybody’s dead, the movie’s over. In addition to being a conceptual rip-off Return of the Living Dead - minus the intentional humor - Amityville Uprising is just another cheap, in-name-only cash-in. With that in mind, Amityville Vibrator sounds like a more entertaining option.