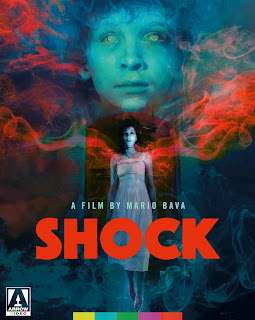 The great Mario Bava’s last film didn’t get much respect on this side of the pond.

Bava was, of course, one of Italy’s acknowledged horror masters (and who almost single-handedly invented giallo), but schlock specialists Film Ventures International apparently didn’t trust his name and reputation enough to promote Shock on its own merits. Instead, they hawked it as a sequel to 1974’s Beyond the Door, a comparatively classless Exorcist rip-off.

From a commercial standpoint, I guess it’s understandable. At the time, Bava’s films were more revered in Europe, while Film Ventures had just made a fortune distributing Beyond the Door. Still, rebranding Shock as Beyond the Door II was not only deceptive, it was selling the movie short.

While Shock doesn’t rank among Bava’s classics, it is sort of a return to the stylish, atmospheric horror from his early days (though still includes a few jarring moments of gory violence). Italy’s own scream queen Daria Nicolodi delivers one of her best performances as Dora, whose first husband, heroin-addicted Carlo, apparently killed himself. Following a nervous breakdown and a few years of therapy, she returns to their old house with son Marco (David Colin Jr) and new husband Bruno (John Steiner).

Carlo, however, doesn’t appear to be done with her. His presence is still in the house and he uses their son to torment her from beyond the grave. “Possessed” Marco not only raises hell around the house, he appears intent on killing her. Naturally, Bruno thinks she’s slipping back into madness, providing logical explanations for all the bizarre occurrences. However, some stunning revelations in the final act confound what we’re led to believe about both Dora and Bruno, as well as Carlo’s suicide. It’s a startling plot twist the viewer isn’t likely to see coming.

Until then, Shock overcomes a rather mundane first act to slowly develop into a tension-filled, surreal ghost story, punctuated by a jolting scare or two. There are several creepy dreamlike sequences, some of which even offer the suggestion that all of this is in Dora’s head. Getting to the good stuff requires some patience - and a willingness to overlook occasionally clunky dialogue and a dull performance by Steiner - but this is ultimately a dark journey worth taking.

Nice to see Arrow Video giving Shock the Blu-ray release it deserves, with a great 2K restoration and a bevy of bonus features, all of which are brand new. After watching them, one can’t help but feel the film has always been a bit underappreciated. While it’s attractively packaged with new & original cover art, perhaps they should have included more of the dubious promotional material from the film’s American release. Deceptive or not, Beyond the Door II is still part of its history and some of that artwork was pretty cool, too.

A GHOST ON THE HOUSE - Interview with Laberto Bava - Mario’s son - who co-wrote & co-directed.

SHOCK! HORROR! - THE STYLISTIC DIVERSITY OF MARIO BAVA - The best of the bonus features, this is an excellent overview and appreciation of Bava’s career by author Stephen Thrower, with a special emphasis on Shock.

5 “BEYOND THE DOOR” TV SPOTS - Includes one where it was paired up with The Dark.

REVERSIBLE COVER - With new & original Italian artwork (we kinda like the new cover).