SLEEP: A Puzzle of Many Pieces...and a Pig 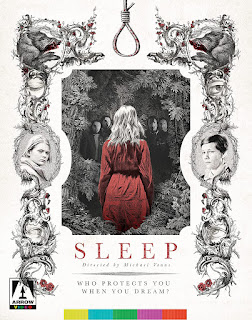 Brooding, bizarre and baffling, Sleep might be the closest thing to vicariously experiencing someone else’s dreams. While that renders the entire film intriguingly ambiguous and unpredictable, sometimes it’s like assembling a 1000 piece puzzle. All the pieces eventually fit together, but it takes patience. And even then, the finished picture still might feel incomplete.

One thing is certain…this German horror film is extremely well made, a confident and audacious debut by director Michael Venus.

suffers from nightmares she’s convinced are visions, as seen in her drawings of a mysterious hotel. When she suffers a nervous breakdown, becoming catatonic, Mona goes to the small village where she’s been hospitalized. In the interim, Mona checks into a local hotel owned by kindly (?) couple Otto and Trude. Since it’s the off-season, she’s the lone guest.

It’s at this point Mona begins to have vivid dreams herself, distressing visions which aren’t overtly nightmarish, but increasingly distressing. Sometimes she - and the viewer - experiences dreams within dreams, the kind where she’s aware she’s dreaming, but isn’t always able to wake herself up. Sometimes they’re related to her mother, the hotel or its proprietors, other times of the young people she befriends, such as Christoph (Max Hubacher), Otto & Trude’s son whom she sleeps with (or maybe doesn’t). Mona has visions identical to her mother’s disturbing drawings, which reveal dark histories about the hotel, Marlene’s harrowing childhood, a mysterious woman in red and the suicides of Otto’s brothers…who might have been neo-Nazis.

Reading back on my last paragraph, it sounds like I’m describing a linear, straightforward narrative, which couldn’t be further from the truth. In fact, I could be completely wrong. One of the more unique aspects of the film is - like Mona - we grow increasingly uncertain if a particular scene is a dream or reality, exacerbated by allusions to old folklore and a pig trotting about the place (one of the odder-shaped puzzle pieces). By the bizarre final act, we’ve become conditioned not to trust what we see or hear.

Venus establishes a dark tone from the get-go, rendered more foreboding by the film’s deliberate pace, quiet tension and surreal imagery. There’s an occasional jolt or burst of violence here and there, but Sleep appears more concerned with building dread than traditional scares, even if we’re not always sure what we should be dreading.

While that last point is sure to frustrate the hell out of many viewers, Sleep doesn’t revel in ambiguity for its own sake. The overall narrative does make sense; Venus just leaves it to us to make the pieces fit. But even if one isn’t particularly fond of puzzles, the direction, performances and aesthetics are engaging enough to make it worth checking out for adventurous horror fans.

EXTRA KIBBLES (some of which provide clarity)

DREAM AND FOLKTALE IN SLEEP - Interview with Louise S. Milne, who discusses the film’s allusions with old folktales.

THIS IS NO DREAM - Introduction by director Michael Venus & actor Gro Swantje-Kohlhof.

A DREAM WE DREAM TOGETHER - Virtual festival intros (done during the Covid lockdown) by director Michael Venus and most of the cast.

MARLENE’S SKETCHES - A closer look at the creepy drawings seen in the film.