DANCING WITH CRIME & THE GREEN COCKATOO: A Decent Double Feature 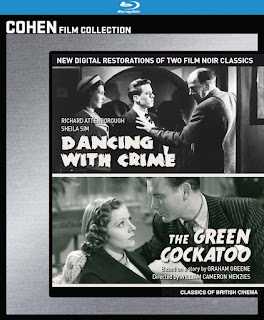 I’ve really been enjoying the double features Cohen Media Group has been releasing on Blu-ray lately. It’s been kind of cool checking out some of the European obscurities they’ve managed to dig up, and this set features a couple of low-budget British crime thrillers from the ‘40s. Neither are classics, but both are fairly entertaining and noteworthy for some of the people involved.

In 1947’s Dancing with Crime, young cabbie Ted Peters (Richard Attenborough) and his fiancee, Joy (Sheila Sim), take it unto themselves to investigate the murder of their childhood friend, Dave, at the hands of a local gangster/nightclub owner. Formulaic but fun, the film is most noteworthy for featuring Attenborough in an early starring role. However, it’s Barry K. Barnes who steals the show as a cold-blooded, slightly sadistic mob enforcer. You might want to watch it with subtitles, though. The dialogue is loaded with very British slang and dialect.

Produced in 1937 but released in 1940, The Green Cockatoo features naive young Eileen (Rene Ray), fresh off the bus to find work in the big city. Instead, a dying small-time hood - knifed for double-crossing the local mob - asks her to deliver a message to his brother, nightclub singer Jim Connor (John Mills). For much of the story - eluding the mob and the cops - she has no idea Jim is the very brother she’s supposed to give the message to. This one is efficiently paced and economically directed by famed production designer John Cameron Menzies, who also helmed the sci-fi classics, Things to Come and Invaders from Mars.Neither of these films are gonna make anyone forget The Third Man, but as second-tier crime thrillers go, both are enjoyable enough on their own terms. As usual with Cohen Media’s two-fer discs, there isn’t any supplemental material, but the video restorations are pretty decent.