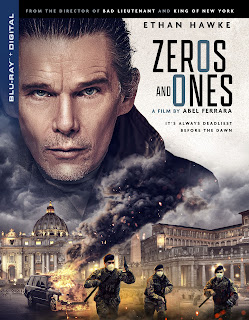 A wave of the paw to the copywriter tasked with writing the synopsis for Zeros and Ones. That person definitely earned their paycheck, describing the film as a high-stakes thriller in which Ethan Hawke plays s a soldier racing against time to thwart a terrorist bombing of the Vatican. After watching the film, all I could do was shrug, “Okay…if you say so.”

In a way, I’m not surprised. The film is written and directed by Abel Ferrara, a provocateur not exactly known for his narrative clarity, especially his most recent work. Perhaps that same copywriter - just as perplexed - phoned him up for some assistance, after which he or she also shrugged, “Okay, Abel…if you say so.”

Zeros and Ones is a baffling, impenetrable slab of ambiguity that doesn’t play even remotely like the synopsis and cover suggest. Again, some of this is to be expected from an Abel Ferrara film, as is the usual quota of religious imagery. But plot? Forget about it. With Hawke as the central character - he also plays his imprisoned revolutionary brother - several shady characters pop in and out of a series of tenuously-tied vignettes which provide precious little exposition. We learn almost nothing about these people…sometimes not even their names.

While equally perplexing, at least Ferrara’s last film, Siberia, was visually interesting and featured another compellingly batshit performance by his longtime muse, Willem Dafoe. However, Zeros and Ones is further undone by a cinema verite style that I suppose is intended to create immediacy, but instead comes across as slapdash, not helped by intentional graininess and a picture so murky that it’s sometimes difficult to see what’s even happening.

As for Hawke…he directly addresses the audience with a video selfie before and after the story. It’s the only time he’s interesting, but good luck trying to figure out what the hell he’s talking about. In the end, when he explains that his video message is actually part of the movie, I couldn’t help but suspect the guy was high AF.

However, Zeros and Ones is the first film I’ve seen to acknowledge the ongoing global pandemic. As far as I could ascertain, it’s not related to the story - though you could say that about half the movie - but most characters are masked-up and Hawke is frequently seen sanitizing his hands. Nice to see Ferrara demonstrating responsible COVID protocol. Now how about demonstrating a little narrative coherence? No one should have to rely on a plot synopsis for a hint of what we’re watching.