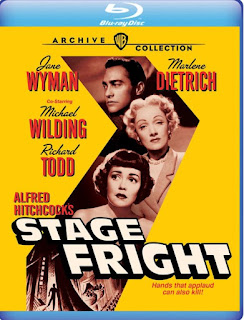 One of Alfred Hitchcock’s lesser known films, 1950’s Stage Fright doesn’t rank among his masterpieces, but his indelible stamp is all over it.

It certainly begins with a bang, with aspiring actor Eve Gill (Jane Wyman) helping friend Jonathan (Richard Todd) elude the police. He tells her that his lover, stage star Charlotte Inwood (Marlene Dietrich), killed her husband in self-defense. However, he’s the primary suspect, taking off in a panic when police came to question him.

Having a longtime crush on Jonathan, Eve agrees to help him hide, as well as stash the bloodied dress worn by Charlotte. She takes him to her father, Commodore Gill (Alastair Sim), who suggests Jonathan’s being framed by Charlotte. Against Dad’s advice, Eve decides to investigate Charlotte a little closer, posing as her temporary dresser. Meanwhile, a chance meeting in a bar with Wilfred Smith (Michael Wilding) slowly turns into romance. However, Smith is the detective in charge of the murder case and he has no idea of Eve’s involvement (which she desperately tries to conceal).

The narrative set-up leads to some amusingly suspenseful sequences which complicate her plan even further. Stage Fright actually contains quite a bit of levity for a murder mystery, though attempts at a real whodunit are minimal (the killer’s identity won’t surprise anyone). For the most part, it's the dialogue and performances that drive the film. Wyman makes Eve a likable protagonist, while Sim is quick-witted and funny, stealing every scene he’s in. Conversely, Dietrich’s performance sometimes borders on self-parody, especially during her musical number. Admittedly though, that could be because I’ve seen Blazing Saddles so many times that It’s easy to see where Madelne Kahn got her inspiration.Though a bit longer - and more meandering - than it needs to be, Stage Fright is a decent little thriller with plenty of Hitch’s familiar touches…suspenseful set-pieces, dark humor, a bit of audience deception and, of course, the prerequisite walk-on cameo. Though it ends rather abruptly, the story comes to an exciting conclusion. Nicely restored for Blu-ray, this may not be essential Hitchcock, but it’s pretty entertaining.