SUPERHOST and the Amiable Antagonist 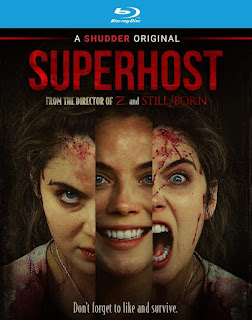 Maybe it’s the grumpy ol’ Boomer in me, but I have the minority opinion that anyone with aspirations of being a media personality should demonstrate a modicum of appreciable talent, or at least have something to say worth hearing. So yeah…I’ve little use for most vloggers, especially those armed with no more than a camera and a healthy sense of narcissism, whose sole mantra is “Look at me!”

Case-in-point, Claire (Sara Canning) and boyfriend Teddy (Osric Chau) are the perky purveyors of a video blog called Superhost, where they travel from one vacation rental to another and film their stay, providing viral reviews to their audience. But all they really care about is how many people are watching them. On camera, it’s immediately obvious they are their own biggest fans.

Off-screen, they’ve just arrived at a remote vacation home to do their next show, concerned about their dwindling number of followers. Enter Rebecca (Gracie Gillum), the 'owner' of the house who’s so animated and cheery she makes the two vloggers look like grunge-era shoegazers. She also turns out to be dangerously psychotic, watching them through surveillance cameras, stalking the house in the middle of the night, cutting off their internet feed, chasing them through the woods with a knife…all while maintaining the same bubbly demeanor and broad grin.

But even though she does end up killing a few people - ferociously - Rebecca’s fun to be around (for the audience, anyway). In fact, she’s generally more likable than Claire and Teddy, which almost seems to be intentional, as if writer-director Brandon Christensen shares a similar disdain for self-absorbed vloggers. And because she’s perfectly played with over-the-top gusto by Gillum, I found myself rooting for Rebecca, much like we all cheered-on Jack Nicholson in The Shining. Unfortunately, that also means Superhost is far less entertaining whenever she ain’t around (which feels like half of the film).

Though never particularly scary, Superhost is frequently amusing, with bits of suspense here & there and a wonderfully gruesome death scene involving a knife to the face. Legendary scream queen Barbara Crampton is even on-hand for what amounts to a glorified cameo. But in addition to Gillum’s caffeinated performance, the film works best when having fun at the expense of the “Look at me!” culture. Those people have it coming.

FEATURETTES - “Behind the Scenes of Superhost”; “Shooting in a Pandemic”; “Superhost FX”