SONG OF THE THIN MAN: A Charming Send-Off 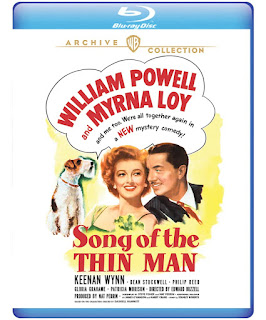 With this release, every film in the Thin Man series is finally on Blu-ray. Yay! Even though Song of the Thin Man is arguably the weakest of the six films, it’s still a charming send-off for Hollywood’s greatest - and funniest - crime solving couple.

For this last go ‘round, Nick & Nora Charles (William Powell & Myrna Loy) investigate the murder of bandleader Tommy Drake (Phillip Reed), who was shot right after a charity event held on-board the S.S. Fortune, owned by Phil Brant (Bruce Cowling). Naturally, there are suspects o'plenty: A chronic gambler, Drake owed money to local gangster Al Amboy; he had just quit his gig on the ship, to Brant’s chagrin; he put the moves on singer Fran Page (Gloria Grahame...mee-ow!), the girlfriend of unstable, alcoholic clarinet player Buddy Hollis (Don Taylor). Not only that, everyone in his band hated him, including musician “Clinker” Krause (Keenan Wynn).

Par for the course, the plot is perfunctory. But this time, the narrative spends more time focusing on the procedural aspects than usual, meaning there’s a little less of the main element that’s always made these films so enjoyable: Nick & Nora’s playful banter, offhanded sarcasm and domestic side stories. Still, those moments are wonderful, particularly the scenes involving parental disagreements regarding Nick Jr (Dean Stockwell). And let’s not forget their loyal dog, Asta, on-hand to steal a few scenes.

Alas, all good things must come to an end, and perhaps it’s good that Song of the Thin Man ended up being the last in the series. It’s still enjoyable and the on-screen chemistry between the two stars remains undeniable, but there are a few subtle signs that the concept has finally run its course. That being said, few franchises in any era have managed such quality and consistency through six films. Completing your Thin Man Blu-ray collection with this one is a no-brainer.