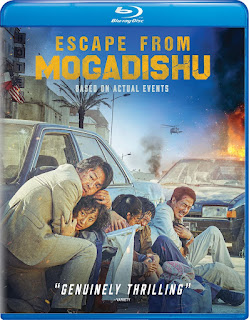 Based on a true story, Escape from Mogadishu is an intense, suspenseful film that unfolds like a mash-up of Argo and Black Hawk Down, with all the political turmoil and visceral conflict such a comparison suggests.

In 1991, Somalia is on the verge of war between the corrupt government and a growing resistance movement. At the same time, both North and South Korea are going to great lengths trying to be admitted into the United Nations, which apparently requires support from that same government. Somewhat amusingly, each ambassador is sucking-up to the Somali president while undermining the other, aided by their prospective intelligence officers.

When war finally breaks out in Mogadishu, both ambassadors - along with colleagues and family members - are trapped in their embassies and unable to communicate with their prospective countries to arrange flights out of the country. With chaos and violence erupting in the streets, even venturing outside is risky. The situation in the North Korean embassy is especially dire…diabetic ambassador Rim Yong-su (Heo Joon-ho) is out of insulin and they’re low on food. After the building is invaded and ransacked by rebels, he has no choice but to risk taking everyone to the South Korean embassy with the hope of finding protection. This doesn’t sit well with his hot-headed intelligence officer, Tae Joon-ki (Koo Kyo-hwan).

But even though South Korean ambassador Hin Sin-seong (Kim Yoon-seok) opens the doors for them, decades of distrust and deceit don’t die easily, even under these circumstances, as depicted through the ongoing conflict between Joon-ki and Sin-seong’s own intelligence officer, Kang Dae-jin (Jo In-sung), the latter of whom expects the North Koreans to defect in exchange for protection. But with the fighting intensifying and chances of escape dwindling, both sides are forced to set aside their differences in order to make a harrowing journey to the Italian embassy, South Korean allies who have a plane available.

Escape from Mogadishu does a great job establishing its characters and the setting’s precarious political climate. The first act is often surprisingly funny, particularly depicting some of the sillier aspects of diplomacy. Somalia looks like an awful place to be a foreign diplomat even before all hell breaks loose. When it does, the film deftly shifts tonal gears as it throws everyone in harm’s way. The scenes of violent conflict are vivid, intense and - in the case of atrocities committed by both rebels and the Somali military - sometimes infuriating. Director Ryoo Seung-wan maintains a constant level of tension - even during the quieter moments - but the highlight of the film is the climactic car chase. Packed into four cars reinforced with make-shift shields, everyone desperately races to reach the Italian embassy with both rebels and police in pursuit. As action set-pieces go, it’s a masterful sequence.

I don’t know how much of this is an accurate depiction of what actually transpired, nor do I really care. Almost epic in scope, Escape from Mogadishu is an gripping human drama that also happens to be a hell of an action film. Engaging characters - performed by a solid ensemble cast - ensure our investment in their dire circumstances. Fast-paced and compelling, this is well-worth checking out.

FEATURETTES - 3 promotional featurettes: “Motive”, “Mogadishu” and “Actors”; An interview with a military consultant; behind-the-scenes car chase montage. These are all very short, the longest running 3 minutes.