WAYNE'S WORLD (SteelBook): A Time Capsule in a Tin 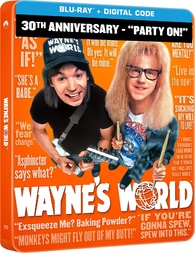 Watching Wayne’s World 30 years after it became something of a phenomenon, it occurred to me that 90% of it would probably be meaningless to anyone who wasn’t around back then. Not just the pop culture references and catch-phrases which briefly became part of teenage vernacular, but public access TV, heavy metal and the growing popularity of Mike Myers.

The Blues Brothers notwithstanding, films based on Saturday Night Live sketches were never built to have a long shelf life, and most of ‘em were already expired before they even made it to the big screen. But at least Wayne’s World’s appeal and relevance lasted longer than the bag of pre-mixed salad in your fridge…long enough to warrant a sequel, anyway. Even in those days, it was easy to see why. Creator-writer-star Myers was well-aware that a five-minute sketch cannot sustain a watchable feature film all by itself.

Hence, Wayne’s World was loaded with satiric asides, cultural references, non-sequiturs, familiar faces, amusing secondary characters and a ton of fourth wall smashing. By turns, the film was clever, stupid, stupidly-clever and cleverly-stupid. The elements that endeared Wayne & Garth to audiences in the first place were still here, but the film didn’t simply coast on them, meaning one didn’t necessarily need to be familiar with the SNL sketch to enjoy it. While there were times when Myers seemed just a tad too impressed with himself (as always) and I never found Dana Carvey to be particularly funny, Wayne’s World was amiably amusing (if seldom uproarious...much like the sketch).

But alas, even Twinkies have an expiration date. Wayne’s World is now a snapshot of another era and this Blu-ray SteelBook is sort of like opening a time capsule that’s been buried for 30 years, punctuated by antiquated catch-phrases and quotes adorning the cover. And like a time capsule, there’s nothing new inside (unless you count the digital copy). This is simply a collectible piece of nostalgia…perhaps a cultural history lesson for some.