THE DRY: Two Mysteries for the Price of One 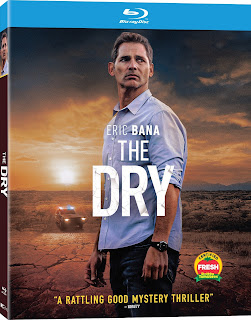 Eric Bana has starred in enough high profile American movies that it’s easy to forget he’s Australian, so it’s kinda jarring to hear him speak without inflection in The Dry. I’ll bet he appreciated the opportunity to shoot a film in his own backyard, though, even if that yard looks like one of the country's bleaker regions.

He plays Aaron Falk, a big city detective returning to his rural hometown for the funeral of childhood friend Luke, who supposedly killed his family in a murder-suicide. Luke’s parents believe otherwise, and implore Aaron to investigate the incident further. But Aaron’s not welcome by everyone because many feel he was responsible for the death of Elle (Bebe Bettencourt) years earlier. She was found drowned in a nearby river and he’s been branded as a liar and murderer ever since.

Through numerous flashbacks, we learn Elle, Luke, Gretchen and Aaron were close childhood friends, though Aaron obviously wanted more than friendship with Elle. Chronicling the circumstances leading up to Elle’s death, the audience becomes certain Aaron had nothing to do with it. Considering her emotional state, it may have even been suicide. However, her father and cousin, Grant (Matt Nable), are sure of his guilt. Now both of them simply want Aaron out of town, Grant going as far as to threaten him and vandalize his car. Still, Gretchen (Genevieve O’Reilly) is glad to see him again, and the two rekindle their friendship…and then some.

So The Dry offers two mysteries: Was Luke’s death the result of a murder-suicide, and who was actually responsible for Elle’s death 20 years ago? Though leisurely paced, the present-day story is fairly interesting, with Aaron’s investigation pointing to a variety of suspects. Bana delivers an earnest, appropriately low-key performance that definitely suits his character, who never really wanted to return to his hometown in the first place. The bleak, dry setting befits the tone, as well, sharply contrasting the flashback sequences, when the town was still vibrant and prosperous, the river still running nearby.

From a narrative standpoint, however, those flashback sequences are far less compelling. Sure, they reveal something about Aaron, but mostly confirm what we already suspected and at no point are they really pertinent to the present-day story. Besides, the film is already somber enough without the distressing revelation Aaron learns about Elle’s death. Still, some viewers might appreciate two mysteries for the price of one.

FEATURETTES - Homecoming; Page to Screen; Jane Harper’s Day on Set (Harper is the original author); Falk and Gretchen; Filming in the Wimmera Region.