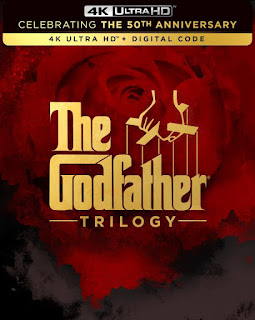 😸THE GODFATHER Celebrates 50th Anniversary With February 25th Theatrical Release & March 22nd 4K Ultra HD Release Of All 3 Restored Films
In celebration of the 50th anniversary of Francis Ford Coppola’s Academy Award®-winning* masterwork The Godfather, Paramount Pictures announced today that the film will have a limited theatrical release in Dolby Vision beginning February 25, 2022 exclusively in Dolby Cinema at AMC Theatres in the U.S., as well as in international territories around the world.  All three films in the epic trilogy have been meticulously restored under the direction of Coppola and will be made available on 4K Ultra HD for the first time ever on March 22, 2022. Coppola’s masterful film adaptation of Mario Puzo’s novel chronicles the rise and fall of the Corleone family and the film trilogy is rightfully viewed as one of the greatest in cinematic history.  In preparation for the 50th anniversary of the first film’s original release on March 24, 1972, Paramount and Coppola’s production company American Zoetrope undertook a painstaking restoration of all three films over the course of three years. Every effort was made to create the finest possible presentation for today’s audiences who can watch the films using technology that has advanced dramatically since 2007 when the last restoration was completed by eminent film historian and preservationist Robert Harris.  Using that work as a blueprint, the team spent thousands of hours to ensure that every frame was evaluated to create the most pristine presentation while remaining true to the original look and feel of the films. 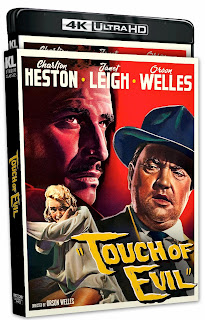 😸TOUCH OF EVIL 3-Disc Special Edition on 4K & Blu-ray coming 3/15
Directed by Hollywood legend Orson Welles (Citizen Kane, The Stranger, The Lady from Shanghai), Touch of Evil is a film noir masterpiece whose Hollywood backstory is as unforgettable as the movie itself. Starring Charlton Heston (The Big Country, Ben-Hur), Janet Leigh (The Manchurian Candidate, Psycho) and Welles himself, this dark portrait of corruption and morally compromised obsessions tells the story of a crooked police chief who frames a Mexican youth as part of an intricate criminal plot. With its iconic ticking-bomb opening shot, shadowy cinematography by Russell Metty (Spartacus), evocative score by Henry Mancini (Arabesque) and memorable supporting turns by Akim Tamiroff (The General Died at Dawn) and Marlene Dietrich (Desire), Touch of Evil is a stylistic triumph that stands the test of time. This 3-disc special edition features 4K restorations of three versions of the film: the Theatrical version, the Preview version and the Reconstructed version based on Orson Welles’ original vision. 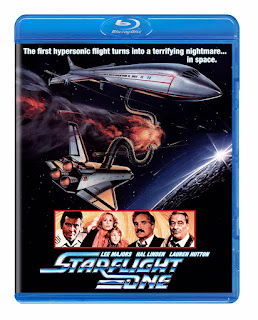 😸STARFLIGHT ONE on Blu-ray 3/8
This is as close to a fifth Airport movie as you’re ever gonna get. Special effects guru John Dykstra (Star Wars) brings his technical expertise to this futuristic vision of the maiden flight of the world’s first hypersonic transport jet. Touted as a technological breakthrough, the super-speed aircraft debarks amid much fanfare. All systems are “go” until a misguided missile renders the craft helpless, pushing it into a deadly orbit above Earth that threatens the total annihilation of its passengers. Time is running out for the Starflight One, a.k.a. Starflight: The Plane That Couldn't Land, in this nerve-jangling space-age disaster movie directed by suspense specialist Jerry Jameson (Airport ’77, TV’s Superdome) with music by the great Lalo Schifrin (Coogan’s Bluff, Bullitt). Heading the all-star cast of this sci-fi adventure are Lee Majors (TV’s The Six Million Dollar Man) as the ship’s captain, Hal Linden (TV’s Barney Miller) as the scientific genius behind the machine, Tess Harper (Tender Mercies) as Majors’ wife, Lauren Hutton (Gator) as Majors’ lover and Ray Milland (Panic in Year Zero) as the high-powered chairman of the aerospace company.
Posted by D.M. Anderson at 12:54 PM