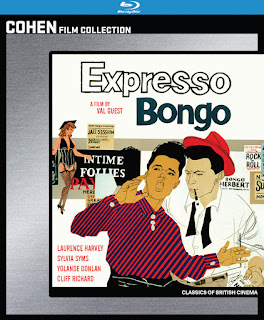 Here’s an odd little British curio from the early days of rock & roll, with a surprising turn by Laurence Harvey.

He plays personable but shady wheeler-dealer Johnny Jackson, who cruises London’s expresso clubs searching for a talent to manage (i.e. take advantage of). He finds one such young rube in handsome, bongo-playing crooner Bert Rudge (Cliff Richard), whom he renames Bongo Herbert. With the help of beleaguered stripper girlfriend Maisie (Sylvia Syms), Johnny uses his fast-talking charm - and no small amount of BS - to push Bongo to fame. Things get complicated when Bongo hooks up with American singer Dixie (Yolande Donlan) and tries to get out of his contract.

Based on a stage play, Expresso Bongo is an amiable but quirky film. It begins satirically, with sharp dialogue that exploits Harvey’s caddish onscreen persona for comedic effect. Sure, Johnny’s the de facto antagonist, but also the most entertaining character in the film (and still likable, despite his narcissism). But while the narrative certainly maintains its cynical jabs at the music business, it's also a genuine musical. And considering the subject matter, it’s ironic that the movie itself isn’t above exploiting Cliff Richard’s teen idol status at the time.When Harvey’s on the screen, Expresso Bongo is a lot of fun, though interest level wanes a bit when focusing on the relationship between Bongo and Dixie (for much of the final act). The musical numbers themselves are bouncy but forgettable, though it’s admittedly surprising to see Harvey burst into song (he ain’t half bad, either). But the music isn’t the message, anyway. How it’s packaged and exploited ultimately drives the narrative, and as such, the film has its share of amusingly perceptive moments.
EXTRA KIBBLES
TRAILER