AMERICAN UNDERDOG: Football, Family and a Dash of Faith 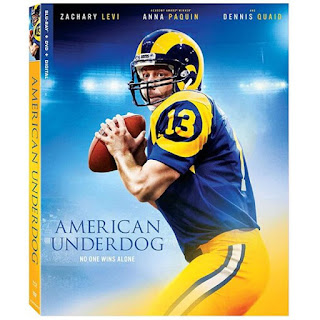 Upon learning American Underdog was directed, co-written & co-edited by the Erwin Brothers, my first thought was, Great…another Jesus movie. In a way, I wasn't too surprised. NFL Hall-of-Famer Kurt Warner made his evangelical leanings abundantly clear immediately after winning the Super Bowl in 1999. However, it’s been my experience that faith-based movies - including those made by the Erwins - generally suck.

But I was pleasantly surprised that American Underdog mostly eschews the dogma to focus on Warner (Zachary Levi), his relationship with wife Brenda (Anna Paquin) and his remarkable rise from lowly grocery clerk to NFL superstar. The Warners’ faith pops-up on occasion, but isn’t the driving narrative force behind the film. Not overtly, anyway.

Being old enough to remember back then, I can attest that Kurt was the feel-good sports story of the year. Talented, earnest and disarmingly nice, he was a hard guy not to root for, even if one wasn’t necessarily a Rams fan. His story was also well-documented throughout that season and beyond, meaning the segments of the film which focus on his football career contain absolutely no surprises whatsoever. Still, they are efficiently presented, enjoyable and - dare I say it? - inspirational.

Less interesting is Kurt and Brenda’s story (but that could simply be because I’m more of a sports movie guy). From their country bar meet-cute through their pledge to stand by each other, the two are pleasant and likable, though the more heartwarming relationship is between Kurt and functionally-blind stepson Zack (Hayden Zaller), which is also inspirational enough without God’s help. Elsewhere, the film is nearly conflict-free, the closest thing to an antagonist being trash-talking Ray Lewis during the climactic Super Bowl game. As someone who dislikes both Lewis and the Baltimore Ravens, it was gratifying to re-live both getting served some humble pie.

More focused on family and football than faith, American Underdog follows the traditional sports flick playbook step by step. Then again, so did Kurt Warner’s career. There’s nothing particularly complex about the story or characters…just an enjoyably unobtrusive chronicle of the man’s unusual path to greatness. More importantly, it’s a faith-based film that doesn’t suck.