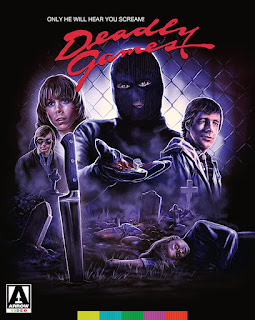 This lethargic 1982 obscurity purports to be a slasher film. However, there’s precious little actual slashing.

Sure, your standard-issue masked killer is stalking and murdering young women, but these scenes are very few and far between. In the interim are endless scenes of cardboard characters playing football, playing board games, talking about sex and - if they’re female - occsionally getting naked. When killin’ time finally does arrive, would-be thrillseekers are likely to be disappointed at the complete lack of bloodletting…or anything resembling suspense.

Deadly Games is structured more like a murder mystery than a horror film, though we never see lead investigator Roger Lane (Sam Groom) doing any real police work. He’s too busy partying with the other characters, getting frisky with Keegan (Jo Ann Harris) and threatening his own wife with a gun (!), the last of which might be one of the clumsiest pieces of foreshadowing in horror history.

Elsewhere, boredom reigns. Cult favorite Steve Railsback is wasted in an embarrassing role as Billy Owens, a looney Vietnam vet and Roger’s best friend, while de facto final girl Keegan is so obnoxiously perky - overplayed to-the-extreme by Harris - that most viewers will be praying for her death. But writer-director Scott Mansfield seems to be so in-love with these characters and his own insipid dialogue that we’re inundated by both. Did he ever actually watch any of the slasher flicks he's trying to emulate?

Too tame for slasher fans, too slow for a thriller, and way too padded-out to maintain interest, Deadly Games is deadly dull, though some unintentional humor might be found in Harris’ cringeworthy performance, as well as NFL legend Dick Butkus showing up to make an utter fool of himself. As usual, Arrow Video does an admirable job of providing a decent transfer and new bonus features, but some relics don’t deserve to be unearthed.

AUDIO COMMENTARY - By The Hysteria Continues, a group that does a podcast.