REPEAT PERFORMANCE: Noir or Not? 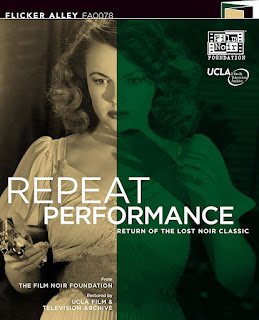 Whether or not Repeat Performance is true film noir is certainly open for debate. Noir guru Eddie Muller even acknowledges as much during his introduction to the film. After all, the basic concept seems more Rod Serling than Raymond Chandler.

The plot does, at times, unfold like an extended Twilight Zone episode. It opens with our amiable heroine, Sheila Page (Joan Leslie), shooting husband Barney (Louis Hayward) on New Year’s Eve. After wishing aloud to friend William Williams (Richard Basehart) that she could re-do the whole year over again, Sheila’s wish is granted, this time with knowledge of what’s going to happen. However, she’s the only one who knows.

Sheila hopes to prevent certain things from ever happening - Barney’s murder in particular - but while she can alter the course of events, she’s unable to change the outcome. That might not be such a bad thing because Barney is such a drunk, abusive, narcissistic bastard that we’re incredulous when Sheila not only tries to save their marriage, but his life. Then again, anyone who’s ever endured an abusive relationship knows that simply walking away isn’t always so easy, so our heart goes out to her.

But is Repeat Performance film noir? Again, that’s debatable, though even The Twilight Zone often ventured into noir territory, narratively as well as aesthetically. Sure, this film is primarily a supernatural melodrama, but one could easily argue it has its own femme fatale in homewrecking playwrite Paula Costello (Virginia Field). And while William’s not the primary protagonist, his bleak fate is largely of his own making. Finally, the suspenseful final act definitely has the look, pace and tone of classic noir.

Even if one doesn’t agree, Repeat Performance is an entertaining film, with yet another affable performance by Leslie and a deliciously nasty turn from Hayward. After a slam-bang opening scene, things are a little pokey and meandering for a time, but as the film gains momentum, so does our attention, which is ultimately rewarded with a satisfying climax. Recently rescued from obscurity and wonderfully restored, this is another solid release from Flicker Alley.

PROFILE OF JOAN LESLIE - A brief appreciation of the actor’s career.

EAGLE-LION: A NOIR-STAINED LEGACY - The best of the bonus features, this doc looks at the short-lived studio’s film output.

AUDIO COMMENTARY - By Nora Fiore (aka The Nitrate Diva).