GUNSMOKE Gets Out of Dodge 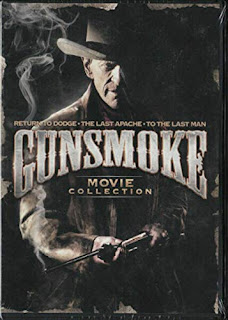 Until The Simpsons came along, Gunsmoke was the longest-running scripted television show in history, 635 episodes over 20 seasons. Though I personally don’t recall ever seeing a single episode, the series had an indelible cultural impact. Before Matt Dillon was a teenage heartthrob, the name was synonymous with the lawman who kept Dodge City clean, as portrayed by James Arness, who remained in the Gunsmoke business for most of his career.

That business would extend beyond the original show. Beginning in 1987, Arness returned as Matt Dillon for a series of made-for-TV movies, three of which are featured in this collection. However, he's since-left his days as a marshal in the dust. In Return to Dodge, Dillon is a fur trapper who comes to the aid of a buddy who’s wanted for a murder he didn’t commit. The real killer is Will Mannon (Steve Forrest), a vicious outlaw Dillon put-away in an old episode and now wants some payback. Arness may be a lot craggier - and whoever did his hairpiece should be bushwhacked - but he slips comfortably back into the role, while Forrest makes a great steely-eyed foe. When you think about it, the film kinda has the same plot as Star Trek II: The Wrath of Khan.

Dodge City and any other remaining characters from the original series were long-gone by the time of The Last Apache. In this one, Dillon must rescue Beth (Amy Stock), the daughter of old flame Mike Yardner (Michael Learned) and kidnapped by hunky Apache warrior Wolf (smoldering like he just stepped off the cover of a romance novel). Along the way, of course, Dillon learns he’s Beth’s dad. Solidly entertaining, this one boasts scene-stealer Richard Kiley, who participates in a hand-wringing version of Russian Roulette involving whiskey shots and rat poison.In To the Last Man, Dillon - now running a ranch with Beth - goes after rustlers and ends up in the middle of the Pleasant Valley War, the infamous blood feud between the Tewksburys and the Grahams. He also becomes de facto guardian to Rusty Dover (Jason Lively), one of the young rustlers who’s simply fallen-in with the wrong crowd. Meanwhile, ex-army Colonel Tucker (Pat Hungle) leads a gung-ho gang of vigilantes lynching anyone they suspect of cattle rustling. This one features the best supporting cast of the three (including Morgan Woodward, Matt Mulhern and a surprisingly vicious Joseph Bottoms), as well as the highest body count. In fact, all three films are far bloodier than the original show (a sign of the times, I suppose). But best of all, prior Gunsmoke-smarts isn’t really a requirement. A few well-placed flashbacks offer all you need to enjoy them on their own merits. Even though watching them back-to-back didn’t quite compel me to go back to see what I’ve been missing, they are solid small screen entertainment.
KITTY CONSENSUS: