THE SIN OF NORA MORAN and the Melancholy Dream 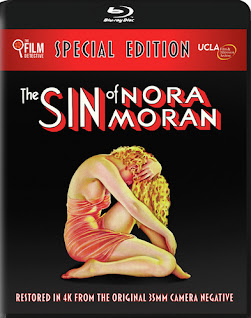 
Ever have one of those vivid dreams which aren't quite nightmares, but still extraordinarily miserable? You're in some kind of ominous predicament, but despite knowing exactly how to get out of it, escape seems impossible. Part of you might even be aware you're dreaming, yet can't force yourself awake. And when you finally do, it briefly feels like the dream followed you into the real world.

The Sin of Nora Moran plays like one of those dreams.

The original poster art by Antonio Vargas – gracing the cover of this disc – is arguably better remembered than the film itself. Though comparatively-obscure, this 1933 Poverty Row curiosity is unlike any movie I've ever seen from that era. Had I seen it back in my younger days of chemically-enhanced weekends, I might have been a little freaked out.

Zita Johann plays the titular character, a young lady whose life has so-far really sucked. Orphaned at a young age, Nora is eventually adopted by a loving couple, who die in a car crash when she's a teenager. Though she has dreams of becoming a Broadway dancer, she ends up working with a traveling circus, where she is raped by her boss, Paulino (John Miljan). Returning to New York, Nora meets gubernatorial candidate Dick Crawford (Paul Crawford), with whom she has an affair. Fearing a scandal, Dick's District Attorney and brother-in-law John Grant (Alan Dinehart) convinces them to end the affair. After Paulino later turns up dead in her apartment, Nora is convicted and sentenced to die for the crime, hastened by Grant as the prosecutor.

While the film sounds like a melodramatic soap opera, rest-assured it doesn't unfold like one. It begins with Nora on death row on the eve of her execution, but the story is presented in flashback as told by Grant, who ironically helped Nora stash the body. Sometimes events unfold as they might have happened, other times they appear to be dreams or hallucinations, and neither Nora nor the viewer are always aware of the difference. Of course, Nora didn't murder Paulino, but even though she can easily clear her name, she refuses to, for reasons which gradually reveal themselves.

Running just over an hour, this surreal journey sometimes has the look of an atmospheric horror film with several haunting, dreamlike sequences. But it's ultimately a tragedy-laden character study of a woman convinced of her own insignificance compared to those she has the misfortune to care about. The inevitability of its conclusion casts a deeply melancholy shadow over the entire film.

Though relentlessly downbeat, The Sin of Nora Moran is creatively ambitious, narratively challenging and visually impressive. Unusual for American cinema of the era, it's almost like an experimental film, yet still manages to be emotionally affecting. All-in-all, a nifty little gem worth discovering for adventurous viewers, and nicely restored for Blu-ray.

"THE MYSTERIOUS LIFE OF ZITA JOHANN” - A 17-minute featurette by historian-director Daniel Griffith, who not-only oversaw the restoration, but knew Johann personally and even coaxed her out of retirement to appear in his own movie, Raiders of the Living Dead.