The Canon of CANNON FILMS 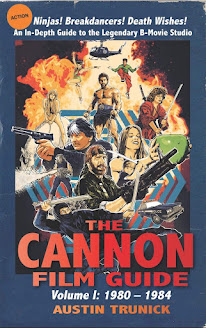 You gotta admire author Austin Trunnick's dedication to his subject. This is only the first of three volumes dedicated to the history and output of a single independent studio. Considering Cannon Films' tenure as a viable entity was only 14 years, the fact this book runs over 500 pages should be a good indication of what awaits the reader.

But Cannon wasn't just any independent studio. The brainchild of Menahem Golan & Yoram Globus, the brand remains beloved worldwide by fans of made-to-order movie cheese. As American-International Pictures was to the 50s & 60s, Cannon Films was to the 80s, cranking out hundreds of bandwagon-jumping, budget-conscious, just-add-Bronson titles, as well as some fleeting stabs at respectability with the occasional “prestige” project.

After laying the groundwork with colorful bios and professional histories of Golan & Globus - leading to their purchase of the struggling Cannon Group - Volume 1 covers the first five years. Each subsequent chapter is dedicated to a single film, from initial inspiration through box office performance. Trunnick includes a staggering amount of detail in-between: anecdotes, plot synopses, production issues, criticism and, most entertainingly, behind-the-scenes turmoil and various clashes between some directors' artistic visions and Golan-Globus' general lack of one. That being said, the most interesting chapters are about some of the studio's most notorious trainwrecks, such as Sahara, Bolero and The Apple.

Trunnick writes with a lot of affection for his subject while still acknowledging the dubious quality of a majority of the studio's output (though his gushing praise for The Last American Virgin is inexplicable). Each chapter is loaded of enough trivia and facts to placate even those who think they know everything about a particular film. While there are occasional factual errors (Bronson was not the villain in Once Upon a Time in the West), the exhaustive amount of research that went into the book is impressive. My only complaint might be that the plot synopses for each film are waaaay too long. If you've already seen a particular film, you can easily skip several pages without missing much. On the other hand, Trunnick is also sparing readers the torment of actually having to sit through some of these movies.

The book ends just as Cannon Films is beginning to hit its stride, meaning Volume II will obviously feature the glory years, when the studio not-only dominated video shelves, but briefly gave the majors a run for their money. If those years are covered with the same insane attention to detail, it'll be another keeper. In the meantime, The Cannon Film Guide Volume 1 is essential reading, not just for those who still revere these films, but anyone interested in a truly epic rags-to-riches story.

MEE-OW! LIKE TAUNTING A MOUSE TO DEATH
Posted by D.M. Anderson at 8:04 PM