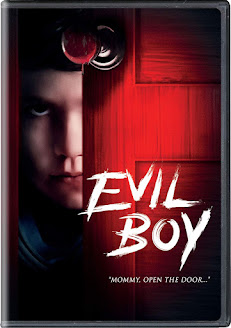 This horror film was originally titled Tvar, which is Russian for  “creature” or “beast.” For the English release, it was first changed to Stray (and still listed as such in iMDB). Now it’s simply called Evil Boy, which is almost too literal, like Halloween being retitled “Stabbing Man.”

While the title does provide a textbook example of truth in advertising, it’s also a sure-fire indication that you’ve seen this movie before. But what ultimately sinks Evil Boy is the scattershot storyline and two main characters whose actions often make little sense.

Polina (Elena Lyadova) and Igor (Vladimir Vdovichenkov), still grieving the loss of their young son, Vanya, hope to fill the void by adopting another one. They visit an orphanage, where Polina chooses the most feral, out-of-control little bastard they have, even though she just spotted him hanging-out in the basement with a mutilated dead body. Ignoring the head nun’s ominous warnings, the couple take him home, where he turns out to be an evil boy indeed.

He endears himself to Polina, who’s taken to calling him Vanja (after their dead son). Igor remains apprehensive and skeptical, a feeling exacerbated when the boy kills their cat and later goes ballistic on a couple other kids while visiting a park. And despite all that, they ignore a psychiatrist’s recommendations to put the kid on meds. More ominously, he increasingly takes on Vanja’s looks and mannerisms.

Then in a head-snapping about face, it’s suddenly Polina who’s terrified of new Vanja and Igor who becomes the protective parent, even in-light of mounting evidence that the kid may not be human. Having its two main characters inexplicably change their tune about the boy is one of the film’s many narrative head-scratchers. Overall, it feels like entire transitional scenes have been axed, resulting in a final cut similar to a puzzle with some of the pieces missing.

Despite a pretty terrific performance by little Sevastian Bugaev in the titular role, we’ve seen similarly murderous munchkins in plenty of other, better-executed films. Already undone by story issues, Evil Boy ultimately ends up being as predictable - and forgettable - as its generic title suggests.