THE LONGEST YARD (1974) and the Mistaken Message 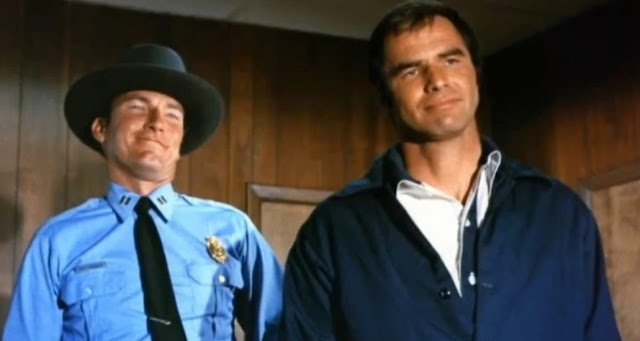 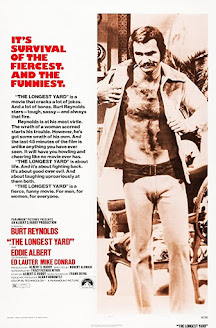 The older I get, the more simplified my wardrobe becomes. Aside from a single suit & tie reserved for weddings and funerals, my closet consists almost exclusively of jeans, shorts, sneakers and t-shirts. Too old and too married to concern myself with being aesthetically appealing to others anymore, the look suits my complex life of working and watching TV (with the occasional road trip to Starbucks).

Taking a cue from Einstein via Seth Brundle, my jeans are all blue, my socks all white, my sneakers all Nikes. Not expending a lot of thought over my daily attire is kind-of liberating. If you’re ever fortunate enough to be in the personal & professional position to purge the pressed pants, Oxfords and button-down collars, I highly recommend it.

As for anyone who feels I should still take pride in my appearance for the sake of my loving wife...let me assure you that after 31 years of marriage, she’s far more aroused when her man engages in rigorous yardwork and assembling IKEA furniture than preening around the house like a GQ model. Besides, I still dress up - or down - in the one room it matters most (which reminds me...I need to get my Indiana Jones costume in the wash before date-night this weekend).

But despite my scaled-back attire, I do take discriminate pride in my t-shirt selection. Not how they fit - like jet-ski tarps - but what’s printed on the front, since novelty shirts say a lot about the people wearing them. For example, a Cleveland Browns t-shirt demonstrates masochistic tendencies, a Hooters logo tells the world you have trouble getting laid and  someone wearing a “Make America Great Again” shirt would struggle with the words you’re reading right now.

All my shirts are movie related, and not the mass-printed Star Wars or Marvel ones you can snag at Target on any given day. Most are blasts from the past, a lot of them featuring titles, artwork and/or tag lines from films of the 1970s. Since that decade is ancient history, I end up finding most of this shit on Amazon, eBay or some website that specializes in playing the nostalgia card to drain your wallet.

One of my favorites is a replica of the Mean Machine jersey from The Longest Yard. Not only is it one of Burt Reynolds’ few genuine classics, it continues to battle Slap Shot for the top spot on my list of the greatest sports movies of all time.

Reynolds plays Paul “Wrecking” Crewe, a burnt-out ex-quarterback who steals his girlfriend’s car and leads the police on a high-speed chase, resulting in an 18 month prison sentence. He isn’t initially held in high regard by the other cons, mainly because he was once accused of “shaving points” in a game. As fellow inmate “Caretaker” (James Hampton) sums-up early on, “You could've robbed banks, sold dope or stole your grandmother’s pension checks and none of us woulda minded. But shaving points off a football game, man, that’s un-American.”

Crewe just wants to do his time and get out, but Warden Hazen (Eddie Albert), has other ideas. He has a semi-pro football team consisting of his thuggish prison guards and wants Crewe to quarterback a team of inmates against them in an exhibition game. Since Hazen more-or-less has him over a barrel (threatening to extend his sentence for attacking a guard), Crewe reluctantly agrees. Hazan sees the game as a demonstration of his power, while Crewe just wants to survive the game. However, he manages to build a team of enthusiastic players by promising the opportunity to get back at the guards.

Most of the middle act has Crewe putting the team together, an amusing assortment of brutes, psychopaths, murderers and misfits, while Caretaker uses his acquisition skills to get game films, guards’ x-rays and anything else that might give them an advantage. He also manages to steal the guards’ new helmets & uniforms for their own use (the aforementioned Mean Machine jerseys).

By this time, our allegiance is clearly with Crewe’s cons and the climactic game is brutal, crude, funny & suspenseful, enhanced by virtuoso direction from criminally under-appreciated Robert Aldrich (whose frequent use of split-screen is utilized to great effect). A superlative example of the triumph-of-the-underdog formula that found its way into nearly every sports-related film since, The Longest Yard is a textbook definition of the “audience picture.” And despite a prologue that simply reeks of the decade from which it sprang, the film holds up as well today as it did back in 1974, meaning it sure-as-fuck didn’t need to be remade...twice.

One of the things I like about my classic movie shirts is they aren’t always immediately recognized as such. So wherever I bump into a fellow fan who acknowledges my Rollerball, Towering Inferno or Soylent Green fashion choices, I feel like I’ve met a kindred spirit. Most of those folks are also my age, if not older. But I learned the hard way that many younger people actually are familiar with The Longest Yard...just not the one I grew up with.

Though I teach middle school in the real world, my professional attire is identical to what I throw on during weekends, meaning I wear movie t-shirts and shorts to work. Most of them are unfamiliar to the kids, though a few have been conversation starters. Sometimes I wear specific shirts on certain days. For example, on the last day of school, it’s my Apocalypse Now-themed shirt with “This is The End” printed beneath a swarm of choppers, while on Halloween it’s...well, you get the idea. And since football’s my favorite sport, I wear my Mean Machine shirt during the first week of the NFL season. Most kids don’t get the connection, though it turns out more-than-a-few identify Mean Machine with the god-awful, teen-friendly remake of The Longest Yard starring Adam Sandler and a truckload of his frat buddies.

Though many are rather pointless and inferior, I’m not blindly opposed to remakes and there have been some great ones that, in my humble opinion, manage to top the originals. William Friedkin’s Sorcerer, John Carpenter’s The Thing and both chapters of Stephen King’s It are a few which immediately come-to-mind. But not-only has The Longest Yard been liberally ripped-off for decades, an early stab at the same story (Britain’s soccer-themed Mean Machine) already demonstrated the futility of trying to remake it.

Frequently mistaken by young people - mostly boys - for someone who’s actually funny, Sandler has the Midas touch of turning everything into pre-digested pus (a few decent stabs at drama notwithstanding). I know I’m in the minority on this, but ever since his Saturday Night Live days, I’ve never been able to escape the notion that Adam Sandler’s biggest fan is Adam Sandler, perpetually looking like he’s on the verge of laughing at his own jokes. The infantile man-boy schtick that endears him to millions has got to be the most irritating onscreen persona since the glory days of Jerry Lewis. Sandler’s unique skill of dumbing things down for the mouth-breathers in the audience is especially glaring in his remakes - which include Just Go with It and Mr. Deeds - because we have bonafide classics to compare them to.

While those students I mentioned do indeed love Sandler’s film (and its dumbass hip-hop soundtrack), the notion that they'd assume we share the same shitty taste in comedy is horrifying. I’m quick to inform them my shirt refers to the original 1974 movie with Burt Reynolds, followed by my usual rant about Sandler's version being dumb and pointless. Each time, their blank stares say it all: OK, boomer.

But hey, they’re kids and nothing existed before they were born, so of course they’re unaware of the original and have no idea who Burt Reynolds was beyond playing the old guy in the remake (assuming Michael Conrad’s role of Nate Scarboro). However, even a lot of adults in my life have assumed the shirt means I love the Sandler movie. I’m quick to correct them, too, because as a movie purist and part-time boomer, I’d rather be a suspected serial killer than a suspected Sandler fan, especially regarding one of the greatest sports movies ever made.

While I don’t begrudge others’ personal tastes, it does sadden me that the 1974 classic is not the first film that comes-to-mind when the title is mentioned. Google The Longest Yard right now and links to the fucking remake show-up before anything else. But I still love my Mean Machine shirt and will continue to wear it regularly, correcting those who mistake the message, one maladjusted millennial at a time.
Posted by D.M. Anderson at 6:31 PM