THE TRIP TO GREECE: Another Odyssey 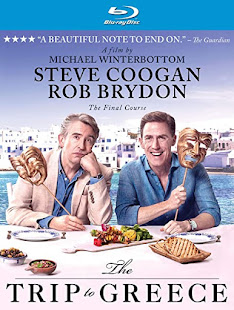 For those previously unaware - like yours truly - The Trip is a British television show starring comic actors Steve Coogan and Ray Brydon, playing semi-fictional versions of themselves as they travel abroad to various countries like Italy, Spain and, most recently, Greece. Each season has also been edited-down into feature films. The Trip to Greece is the first in the series that I’ve seen, and I gotta say it didn’t compel me to go back and see what I’ve been missing.

It starts off great, though, with Coogan & Brydon laying the groundwork: A week-long road-trip through Greece, stopping at various restaurants - lots of restaurants - and ancient ruins. Along the way, their semi-antagonistic banter covers a variety of topics, sometimes related to Greece (Homer's Odyssey, in particular), but more often about each other. It's kind-of amusing, at first, though these guys seem reeeeeally impressed with themselves and it soon becomes apparent the film is gonna be more about them than the country they’re visiting. In fact, Greece often feels like an afterthought.

I dunno...maybe the main purpose of these films is to simply provide a framework for improvisation, so I won’t hold that against it. Those in-sync with Coogan & Brydon’s brand of humor - ranging from dry to slightly juvenile - will probably get a big kick out of their plethora of celebrity impersonations and cultural commentary. Sometimes it’s funny, but just as often, they’re so wrapped up in one-upping each other that they seem to have forgotten the audience.During the final act, The Trip to Greece inexplicably turns serious and doesn’t look back. The sudden shift in tone is jarring and I still don’t understand the purpose of concluding what has been a mostly congenial film on such a somber note. Until then, the film is hit-or-miss, though fans of the two stars are likely to appreciate it a lot more.

MEH...THOUGH FANS OF THE SERIES MIGHT PURR.
Posted by D.M. Anderson at 8:44 PM