THE BARGE PEOPLE: Something Fishy's Going On 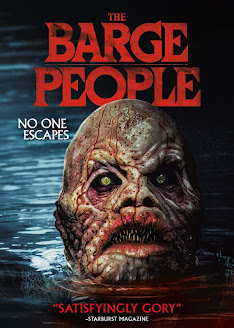 I don’t know whether or not touring England’s rural canals on a rented barge is actually a thing, but we’ll play along. While it doesn’t really seem like a good time even without murderous cannibals, it’s at-least an interesting setting for a horror film.

Unfortunately, any originality in The Barge People ends there. The rest is a drab rip-off of The Texas Chainsaw Massacre in which four dull twenty-somethings embark on a weekend boat trip, only to run afoul of the locals. Their first unfortunate encounter is with a scuzzy couple with serious anger issues who later attack them on their own boat. But that’s nothing compared to the arrival of slimy, fish-faced mutants whose diet happens to consist of dull twenty-somethings.

While originality isn’t necessarily a prerequisite for a good horror film, The Barge People stumbles right out of the gate by introducing people who’re almost impossible to care about, including the standard-issue, self-centered douchebag with a sweater tied around his neck and a phone glued to his ear (meaning, of course, he’s a dead man walking). That character is painted in broad strokes, as is the angry couple they clash with, but the rest have even less personality.

The film largely depends on tired tropes and the stupidity of its characters to move the plot along. Unlike Tobe Hooper’s perennial classic, this one substitutes gore for shocks and suspense. But even the death scenes are repetitive and dull, mostly notably during the initial attack, which seems to go on forever and mostly consists of mutants nuzzling their victims’ necks as blood sprays everywhere. While the mutants’ fish-head make-up is impressive for the budget, I think seasoned gorehounds will be largely disappointed.

Things culminate, of course, with a final girl being stalked through the dark woods, along with a predictable plot revelation that cynically fulfills the promise of the movie’s tag-line, “No one escapes.” Unique setting notwithstanding, The Barge People brings nothing to the table we haven’t seen before in countless other movies since 1974.