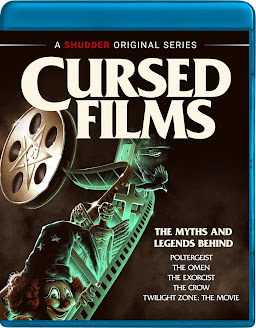 Review by Cuddles, the Couch Potato😸

Horror fans have undoubtedly heard the stories over the years...the deaths of Poltergeist cast members, mysterious “accidents” (always in quotations) on the set of The Omen, the extra in The Exorcist who later murdered someone.  While it’s fun to imagine certain films raising the ire of demonic forces, few of us give such ideas much credence.

Fortunately, neither does Cursed Films, a five-episode series which first streamed on Shudder. Instead, each episode looks at the myths surrounding a particular film’s supposed “curse.” The origins of those stories, often fueled by tabloid media or studios hoping to stir publicity, are explored with an appropriately skeptical eye, featuring numerous interviews with some of the filmmakers & cast, as well as various scholars and horror experts.

But unlike most  histrionic “documentaries” about the paranormal, Cursed Films is not interested in perpetuating the myth. Most of those interviewed who were involved with the films (including Linda Blair, Michael Berryman, Richard Donner and Gary Sherman) are dismissive, amused or angry over these urban legends. But on a lighter note, some episodes have fun with a few idiots who are convinced the curses are real. My personal favorite is a self-employed exorcist whose previous job was managing a furniture store.

Actually, only the episodes about the Poltergeist trilogy, The Omen and The Exorcist explore the speculated curses associated with them. The remaining two, The Crow and Twilight Zone: The Movie, are straight-up accounts of the on-set tragedies that resulted in the deaths of Brandon Lee, Vic Morrow and two young children. No mysterious forces at work here, just two terrible accidents that could have been avoided if certain people associated with the production had been more responsible. After watching this, I can’t help but think John Landis probably got away with murder.

Despite the sensationalistic title, Cursed Films is a fascinating, occasionally somber series with plenty of anecdotes, behind-the-scenes footage and level-headed analysis debunking the validity of these stories (with a few dead-serious dumbshits thrown-in for comic relief). Whether one believes in curses or not, these five episodes are well worth any horror fan’s time.

AUDIO COMMENTARIES FOR EACH EPISODE -  By director Jay Cheel.

MEE-OW! LIKE BEING TURNED LOOSE IN A BIRD SANCTUARY.
Posted by D.M. Anderson at 9:19 PM