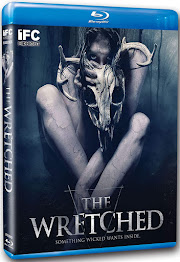 The Wretched has the distinction of being the first movie since Avatar to hold the #1 position at the box office for six straight weekends. Granted, it was one of the only new movies given some kind of theatrical release during the pandemic, so it's sort of like winning the Daytona 500 because all the other drivers totaled their cars. Still, history puts it in the win column.

Not that we’re keeping score, since box office performance has nothing to do with whether or not a movie is any good. While The Wretched definitely isn’t wretched, it’s another one of those horror movies destined to find its audience at home, where expectations are decidedly lower.

The plot is similar to Fright Night, only without the laughs, but writer-directors The Pierce Brothers don’t appear interested in tickling your funny bone. Being that many of the victims are little kids, that’s probably a wise decision. This one has delinquent teen Ben (John-Paul Howard) moving in with his divorced dad (Jamison Jones) for the summer, only to discover the hot neighbor lady, Abby (Zarah Mahler), has been inhabited by a ravenous witch that chows-down on children. Worse yet, the witch has the ability to erase her victims’ existence from everyone’s memory. Naturally, no one believes Ben, least of all Dad, who has little reason to trust him in the first place. But Ben’s eventually able to convince snarky new friend Mallory (Piper Curda) that something ain’t right with the neighbors.

The film meanders at first, mainly in a futile effort to establish Ben as a character we care much about, such as a pointless subplot where he’s repeatedly picked-on by some locals. However, the witch herself is an interesting creation, effectively realized through performances and (mostly) practical effects. The film gets a lot more interesting once she starts wreaking havoc.

With the exception of a late plot revelation, everything ends predictably, with the standard-issue, ominous final shot that might wow those who’ve never seen a horror movie. For everyone else, the film walks a familiar path that’s still enjoyable with a competent guide. As such, The Wretched may not have been worth risking your health to catch at a drive-in this summer, but it’s certainly a decent couch potato pick.

2 AUDIO COMMENTARIES - 1) By The Pierce Brothers; 2) By composer Devin Burrows