You've Got a Friend in Z 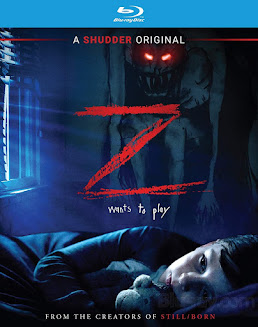 Uncooperative imaginary friends aren’t exactly new to movies. But if done right, they can still be entertaining horror fodder. And for a while, Z is a fun little fright flick that exploits the concept pretty well. However, it doesn’t quite know when to quit and might have been more effective as a short subject.

Little Joshua (Jeff Klyne) is a weird little kid with few friends, as well as teachers who are disturbed by his behavior. His go-to playtime pal is the titular creature, which resembles a cross between Gollum and the Babadook. Josh also gets in a lot of trouble for Z’s behavior, like when one of his only friends gets tossed off a staircase. Family psychologist Dr. Seager (Stephen McHattie) has definitely seen this behavior before, but Josh’s mom, Elizabeth (Keegan Connor Tracy), suspects Z might be real.

But of course he’s real, which previously-skeptical dad Kevin (Sean Rogerson) learns the hard way. It’s at this point the movie starts to lose its way. Prior to this, the creature is effectively depicted through hellish charcoal drawings and brief “did-I-just-see-that?” glimpses. Z may not be the most original movie monster to ever grace the screen, but showing it only sparingly helps build tension. However, the spell is broken once it’s fully revealed, sloppily rendered with cartoony CGI.

It’s also at this point when the film shifts focus from Joshua to Elizabeth, whose own childhood figures into the narrative. Unfortunately, her reckoning with Z comprises the entire third act, which is not-only anticlimactic, it feels like an attempt to pad-out the story to feature-length, punctuated by an underwhelming resolution.

Until then, though, Z may not be a game-changer, but is undemanding fun, with a solid cast, some eerie set-pieces and a few well-timed jump scares. Light on graphic violence and language, it might even be a safe, solid pick for some kind of family fright fest, if that’s what you and your brood are into.