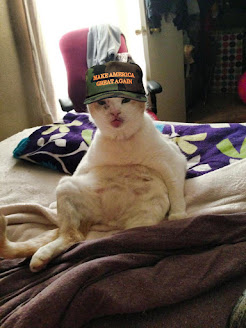 
We all know Walmart continues to be an insidious threat to local retailers everywhere (absorbing & replacing them like The Thing) and I'd generally rather shit glass than shop at one. But after a recent visit when I discovered it even carries a selection of sex toys (you can read about that HERE), I must grudgingly concede Walmart is probably doing more to address shoppers' daily needs than most box stores.

This guy's daily needs consist of Ding Dongs, coffee and cheap movies. I'm also sad to say that in my neck of the woods, the local Walmart has a better disc selection than anyone else. Video stores are extinct around here, and unless Disney and Game of Thrones are all you care about, the only thing Best Buy is good for is duping you into getting a new phone plan. But Walmart is not-only cheaper, it still stocks the shelves with more than just blockbusters you impulsively grab while shopping at Safeway. And if you time it right, its Blu-ray budget bin is loaded. So whenever the wife chooses to brave Walmart, so do I, negotiating through the butt-cracks, MAGA hats & pajama bottoms to dig for buried treasure.

I caught Walmart on a good day this time, quickly snapping-up Shout Factory's Scream Queen Double Feature ($6.96) containing The Fog and The Howling. While I know Halloween is widely considered John Carpenter's best horror film, I always thought The Fog was more atmospheric, with his most unappreciated music score. Though I've never been much of a werewolf fan, The Howling benefits from director Joe Dante's humorous touches and the transformation scenes are just as effective as those in An American Werewolf in London (which continues to be phenomenally overpraised). 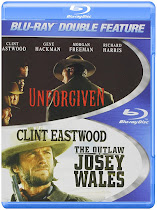 Further digging turned up the Unforgiven/The Outlaw Josey Wales Double Feature ($6.96). I hadn't seen Unforgiven since it won the Oscar for Best Picture 30 years ago and forgot how good it is. My oldest daughter, Natalie, loves westerns, but she has fickle tastes (actually disliking The Wild Bunch!). Even though she's grown a bit disillusioned over Clint Eastwood's politics, she really enjoyed Unforgiven...perhaps because it's fun to buy into the theory that Will Munny represents the Man with No Name after he's been put-to-pasture. While I'm not as enamored with The Outlaw Josey Wales as some Eastwood fans, it has its moments, though I'll never understand why Clint was so twitterpated with Sondra Locke. 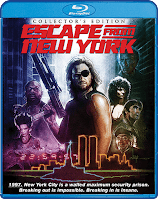 I also found Shout Factory's version of Escape from New York ($12.96 $6.96). I'm pretty sure it was thrown into the budget bin by mistake (or left there by a shopper who changed their mind), since it rang up at thirteen bucks. But after arguing where I found it, the young clerk casually shrugged and re-rang it at the budget bin price. While such an attitude probably won't earn him the title of Employee of the Month, I appreciated his indifference to doing an actual price-check. Since it's among my lifelong favorites, Escape from New York is now one of the few movies I've purchased in every known format. 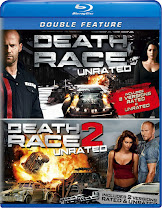 Ironically, my wife didn't find what she needed on this visit. Actually, neither did I, but since when has need factored into movie collecting? But I didn't want her to think the trip was a total waste, so we popped into 7-Eleven on the way home for Big Gulps and lottery tickets, where I found the Death Race/Death Race 2 Double Feature ($3.99). Neither film was robbed during awards season, but Jason Statham is always good for a few shits & giggles, even if they're sometimes unintentional.
Posted by D.M. Anderson at 2:47 PM