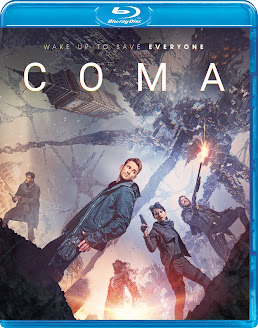 If nothing else, Coma is probably the most visually-arresting science-fiction movie I've seen since Inception. There's hardly a single frame that wouldn't make a totally bitchin' prog-rock album cover. Yeah, the CGI is obvious, but a hell of a lot of imagination went into creating this world.

This Russian film has a pretty cool concept, too, though it definitely owes a tip-of-the-hat to The Matrix. The titular world is a place which exists outside of reality, a bizarre composite of memories from people while comatose, induced or otherwise. After suffering a violent car crash, a struggling architect “wakes up” here and is pursued by a nearly shapeless black mass. He's rescued by a couple of heavily-armed fighters and taken to a dilapidated factory where a small rag-tag group have been hiding out. We later learn the shapeless, nearly-invincible creatures are called Reapers, their existence being one of the more interesting aspects of this world.

The people have no clear memory of the past, how they arrived here or even their names. Since most who arrive develop unique abilities – generally related to a skill they possessed in the real world – characters are given nicknames. For example, “Tank” (Vilen Babichev) is a dedicated fighter, while “Astronomer” (Milos Bikovic) is good with maps and numbers. Then there's “Phantom” (Anton Pampushnyy), the resident badass with a special talent for being a sociopathic douchebag. However, I'm still not sure why the obligatory love-interest (Lyubov Aksyonova) is named “Fly,” since she doesn't.

As for the newly-appointed “Architect,” he learns to conjure bridges, walls and buildings through mere thought, a skill which group leader Yan (Konstantin Lavronenko) plans to utilize by having him build an island utopia free from the reach of Reapers. However, Coma has a few great narrative surprises up its sleeve, which I'd wager to say most won't expect.

Though the story and characters maintain interest, the real stars of the film are the eye-popping special effects and production design. Coma is constructed from imagery stored in people's subconscious. Like a lot of fragmented memories, everything we see is only partially complete...most buildings, roads, vehicles and animals look as though large bites have been taken out of them. Not only that, nothing appears to be bound by the rigid rules of reality, meaning one can look straight up and see skyscrapers, or jump from a ledge and horizontally land in a section created from a different memory, or stand next to a submerged submarine without drowning.

It's as if Salvador Dali, M.C. Escher and Roger Dean had teamed-up to create a massive mural, so the visuals alone make Coma worth checking out. But the concept and story – however derivative – are also pretty engaging, meaning fans of such brain-benders as The Matrix and Inception should get a kick out of it.