The Challenge of VALLEY OF THE GODS 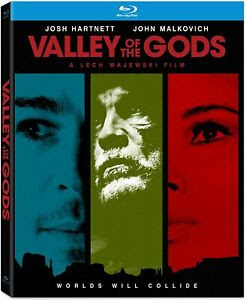 The film opens with a contemplative Josh Hartnett driving down a lonely desert highway and ends with a giant toddler stomping through a major city. In between...well, good luck, kids!

To call Valley of the Gods ambiguous is an understatement. I was nearly an hour into it before being able to (sort of) piece together the relationships between the four main characters. The film switches from one to the next then back again with little in the way of transition. Throw in a non-linear storyline, sparse dialogue, flashbacks and plenty of isolated shots which are obviously intended to be thematically symbolic and you've got one helluva perplexing picture.

Speaking of theme, I'm still not 100% sure what it is and can't shake the feeling director that Lech Majewski would not-only be amused by this, but even a bit contemptuous of anyone who didn't “get it.” In fact, he openly mocks all forms of mainstream entertainment a key scene where disillusioned writer John Ecas (Josh Hartnett) bitterly laments all the absurdity in the world. If we, as viewers, are more confused than enlightened, we have failed the challenge and are therefore also part of the absurdity.

Elsewhere, John Malkovich adds another maladjusted character to his resume with Wes Tauros, the world's richest man who has exiled himself in a Xanadu—like castle overlooking the city. Yet for all his wealth, money cannot provide the one thing he desires most: to have his dead wife and daughter back. Though not for a lack of trying, like when he enlists the service of Karen Kitson (Berenice Marlohe), who agrees to be made-over to resemble Tauros' wife because he promised to get her back the son she lost in a custody battle. Still none of this explains why Tauros imprisons all his guests – including Karen - in the basement.

Tauros also plans to mine uranium from the Valley of the Gods, a desert

region inhabited by Native-Americans who are not happy about it, especially hard-drinking, hot-headed tribal cop Grey Horse (Steven Skyler). In one of the film's more blatant metaphors, he has sex with the desert itself, which in-turn gives birth to a child too heavy for anyone to lift on their own (and presumably the same toddler who goes full-Godzilla during the climax).

These characters and scenarios are tenuously linked through Ecas, who's invited to interview Tauros and also pops up in the desert valley, apparently to purge himself of his previous miserable life (which includes forgetting the wife who dumped him). Interspersed throughout the “plot” are a plethora of sequences – often devoid of exposition – which are supposed to convey some thematic significance. Sometimes we get it, sometimes we simply feel stupid...sorta like watching an episode of Jeopardy.

But that's not to say Valley of the Gods isn't often interesting. Taken as a whole, the film frustrates more than it entertains. But as a series of individual vignettes, the frequent use of striking visuals, morose characters and imaginative use of CGI create a tone similar to dark poetry, where the language is sometimes more important than the message. We may not always know what to think, but we're certain how the imagery makes us feel.

In that respect, Valley of the Gods sort-of works. At over two hours, it's way too long for its own good, but there's enough demented imagination on display for more adventurous viewers see it through to the end. Those expecting to be rewarded by any kind of explanatory payoff should probably stay far away, or risk failing the challenge.

“THE MAKING OF VALLEY OF THE GODS” - 17 minute doc featuring interviews with the director and primary cast.