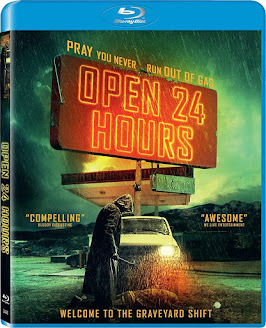 A convenience store in the middle of nowhere is always a great setting for a horror film. I should know because I used to work the graveyard shift at one. That time of night, it's like the rest of the world has disappeared and you’re all alone with nothing but the hum of the beer coolers for company. In contrast to the pitch black sky outside, fluorescent lights cast a stark, eerie glow over the entire store. And even though that shift is an exercise in monotony, somehow your senses are sharper, every out-of-place noise amplified, every movement in your peripheral vision commanding your immediate attention.

The few times someone does pop in, you’re never 100% certain if that person is simply an insomniac grabbing a pack o’ smokes or the last thing you see before he blows your head off for the fifty bucks in your register. During those few minutes in that person’s company, you can’t help but entertain every worst-case scenario.

Until it descends into just-another slasher film, Open 24 Hours perfectly captures the creepy atmosphere of a run-down convenience store in the middle of the night, then amplifies the dread by dropping-in a main character who's already a few cans short of a six-pack.

After spending a few years in a mental hospital for setting her boyfriend on fire, Mary (Vanessa Grasse) accepts a job working the graveyard shift at a local gas station/market. Since said-boyfriend is notorious serial killer James Lincoln Fields (Cole Vigue)  - who made her watch him murder his victims - she still suffers from serious PTSD, which includes hallucinations and extreme paranoia. Even though he’s rotting in prison, Mary remains terrified of him.

Most of the film takes place during her first night at work. Despite support from her best friend, her parole officer and kindly co-worker Bobby (Brendan Fletcher), Mary's own mind conspires against her when she’s alone. This leads to some great sequences where the viewer isn’t certain if what she sees and hears is real or the product of her delusions, such as her encounter with a vengeful mom whose daughter was one of James’ victims (and holds Mary equally responsible).

The first two-thirds of the film are so engaging, tension-filled and atmospheric that it’s a shame to see the narrative descend into more conventional - and implausible - territory. James, of course, has just escaped from prison for a little payback, slaughtering a majority of the cast along the way. How he manages to know where Mary works is a question the movie chooses not to answer.

James’ preferred mode of mayhem is blunt force trauma, mainly hammers. Since Open 24 Hours pulls few punches in the gore department, their superlative skull-scrambling efficiency is vividly depicted, especially during a wince-inducing scene where James sadistically applies his craft on a few poor bastards bound-and-gagged in chairs. If nothing else, impressive make-up effects keep the dumbed-down final act watchable.

It’s just too bad writer-director Padraig Reynolds felt the need to eschew all that masterfully-developed psychological tension for tired slasher tropes, right down to the killer chasing the Final Girl and that inevitable moment when she falls and helplessly crawls along the ground. Until then, though, Open 24 Hours is a small winner, with a great setting, an appealing heroine and some genuinely harrowing moments. I guess two-thirds of a great horror movie is better than all of a mediocre one.

“THE MAKING OF OPEN 24 HOURS” - Featurette

ALTERNATE ENDING - Which ain’t much different