A Double-Shot of TRACY & HEPBURN

Was there a more consistently engaging on-screen couple than Spencer Tracy and Katharine Hepburn? Maybe William Powell and Myrna Loy (especially their Thin Man series), but other than that, Tracy & Hepburn went together like cops & doughnuts. They appeared in nine films together - most of them classics - before Tracy passed away too soon. Two of those movies, Pat and Mike and Without Love, are now on Blu-ray. 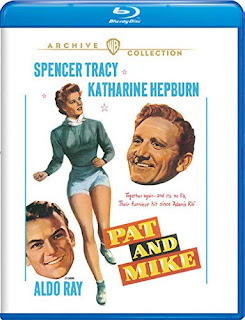 If forced to choose between the two, Pat and Mike (1952/95 min) is the obvious choice. Tracy shines as fast-talking sports promoter Mike Conovan, as does Hepburn as even faster-talking super-athlete Pat Pemberton. She appears to be good at every sport she plays, at least when domineering fiancée Collier Weld (William Ching) isn’t around. Seizing the opportunity, Mike takes total charge of her budding sports career and personal life, which eventually includes trying to keep Collier at-bay because Pat has a habit of choking in his presence. But Pat not-only holds her own against Mike’s overreaching authority, she becomes her professional and personal partner.

Though some might understandably throw their hat in the ring for Adam’s Rib, this is Tracy and Hepburn at their most charming. Adding just a hint of romance to the comedy, the film is consistently funny, as is the couple’s quick-witted banter. A hilarious highlight has to be when Pat comes to Mike’s rescue against some local gangsters, then later re-enacts the entire incident at the police station after everyone is brought in. And keep an eye out for a very young Charles Bronson as one of the gangsters, demonstrating comic gifts he’d seldom be allowed to display in his later career.

Pat and Mike is nicely restored for Blu-ray, but is unfortunately lacking any bonus features beyond a couple of theatrical trailers.

MEE-OW! LIKE BEING TURNED LOOSE IN A BIRD SANCTUARY 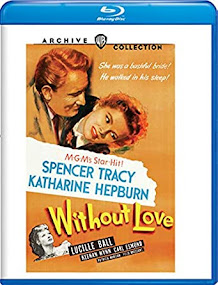 Not as widely-remembered, Without Love (1945/110 min) isn’t as consistently funny, but still benefits from the stars’ undeniable chemistry. In this one, Patrick Jameson (Tracy) is a disillusioned government scientist who throws himself into his work after getting his heart broken. Jamie Rowen (Hepburn) is a recent widow who has given-up trying to find love as great as the one she just lost. Their relationship begins antagonistically, but while he’s renting the house she owns, they develop mutual respect. Then Jamie appeals to his logic by suggesting they get married, not for love, but practical reasons, both professionally and intellectually. He agrees, of course, so now the challenge is trying to keep love out of the marriage.

Watching this one for the first time, I can’t help but think Without Love might have served as an inspiration for Le Miroir á deux faces, which was in-turn remade as The Mirror Has Two Faces. More sweet-natured in tone than truly funny, the film still has its moments. But as good as the leads are, Lucille Ball and Keenan Wynn often steal the show as constantly-bickering, on-again-off-again lovers. Ball, in particular, provides most of the laughs as a fun-loving woman with a morally casual attitude. Ultimately, the film isn’t quite on-par with the couple’s acknowledged classics, but still very enjoyable.

Without Love comes with an odd batch of bonus features, like a cautionary - and surprisingly timely - short subject, “Crime Does Not Pay,” about opportunistic lawyers profiting from a fatal diabetes treatment.  Also included is the Tex Avery cartoon, “Swing Shift Cinderella.”
KITTY CONSENSUS: