The Silent Relevance of THE CITY WITHOUT JEWS 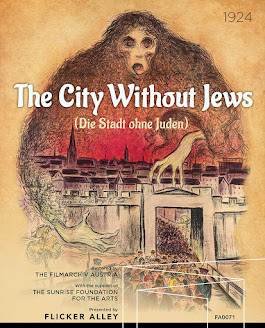 Based on a popular novel by H. K. Breslauer, The City Without Jews is a satiric Austrian film from 1924 which addressed anti-semitism and ended up being ominously prophetic. Recently - and beautifully - restored, its resurrection couldn’t be more timely, since its overall theme is as relevant today as it was 100 years ago.

In the fictional city of Utopia, antisemitism is rampant. Most of its citizens, as well as the new head Chancellor, resent the Jews’ power, wealth and influence. Their solution is to expel every Jew from the country, which they feel will open-up business and employment opportunities for everyone else. Instead, the economy tanks, businesses are ruined and other nations won’t trade with them. Not only that, some families are torn apart. When the country is at its weakest, Jewish exile Leo (Johannes Riemann) disguises himself as a wealthy Frenchman, hoping to influence the government into reversing their decision, as well as reconciling with non-Jewish fiancee Lotte (Ammy Miletty).

The Leo/Lotte dynamic is actually the weakest aspect of the narrative. Contrasting the ominous implications of the concept, Riemann portrays Leo as a comically conniving Snidely Whiplash-like villain, complete with a dastardly mustache. Until then, though, the film is pretty chilling. If modern viewers have been paying even a little attention to the racist bile currently being spewed by certain world leaders, Chancellor Schwerdtfeger’s paranoid rants vilifying the Jews should be absolutely terrifying. And remember, this film predates the rise of the Nazi Party, who later came-to-power power using similar rhetoric. Since one particular paranoid president has-since emboldened millions of mouth-breathers to openly hate anyone different, we still have a lot to learn from past atrocities.

But even with its lofty agenda and timely message, the movie has a tendency to view Jews as more of a commodity than a culture. No one experiences an epiphany over their treatment of the Jews, expressing remorse only when their own financial futures are in jeopardy. Perhaps that’s intentional, since appealing to a person’s empathy is sometimes a futile effort. Still, the argument might remind modern audiences of those who claim to support immigration because we need vegetable pickers.

That minor quip aside, The City Without Jews is more than a historically interesting curio. The film is an early milestone of Austrian cinema, with themes that remain unfortunately relevant. In addition to an outstanding restoration, this disk from Flicker Alley includes some great bonus features, some of which provide context of the era when it was made.

“VICTIMS OF HATRED” - A 45-minute two-reeler from 1923, similar in theme to The City Without Jews, though considerably more somber in tone.

“THE CITY WITHOUT...JEWS, MUSLIMS, REFUGEES, FOREIGNERS” - This is a photo gallery from a 2018 exhibit contextually related to the film. It’s only 18 slides, but some of the items in the exhibit, like a board game called “Jews Out!” are jawdropping.