THE OUTPOST Brings the Battle of Kamdesh Home 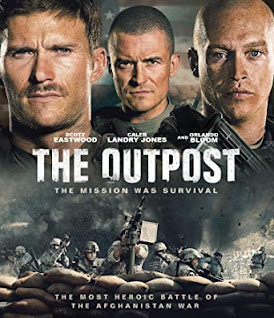 The opening title cards pretty-much tell the story. Combat Outpost Keating was one of many temporary U.S. installations in Afghanistan to defend locals from Taliban attacks. However, Keating’s location was a geographical nightmare, surrounded by mountains and extremely vulnerable to attack. Even the soldiers stationed there knew they were essentially fish in a barrel.

So almost immediately, my first takeaway from The Outpost was that parts of our military are run by monkeys.

Based on Jake Tapper’s book, The Outpost is a true story of the soldiers tasked to defend this region. They are attacked almost daily by Taliban hiding in the hills. Most are brief skirmishes, but everyone is certain an all-out onslaught is imminent. The outpost also has a hard time hanging onto commanding officers, who are either killed or relieved of command.

Most of the film is presented from the POV of Sgt. Romesha (Scott Eastwood, Clint’s kid), with various other soldiers briefly introduced so we can place faces with names. But even though the characters are all based on real people, we don’t really learn all that much about them. Storywise, the film is similar in structure and tone to Black Hawk Down, which also eschewed character development in favor of emphasizing the ominous implications of their situation.

Of course, the Taliban eventually wage an all-out assault on the outpost - the Battle of Kamdesh - which comprises the entire third act. It’s easily the most engaging part of the film and while director Rod Lurie is no Ridley Scott, he effectively captures the chaos of the battle with a minimum of sensationalism or embellishment. Without explicitly stating it, the film also questions the wisdom of the military’s decision to man this outpost for as long as they did.

Considering how little time it spends developing any of the characters, the film boasts an interesting cast, including a surprising number of famous actors’ offspring. In addition to Eastwood, there’s Milo Gibson (Mel’s kid), Will Attenborough (Richard’s kid) and James Jagger (Mick’s kid). Orlando Bloom also is thrown in for marquee value, though it’s mostly a glorified cameo.

Elsewhere, The Outpost is a bit overlong and sometimes meandering, but ultimately looks and feels like an accurate depiction of how the Battle of Kamdesh went down. Yet another film that mostly skipped theaters due to the ongoing pandemic, it’s worth seeking out and - considering the limited budget - might actually play better at home.